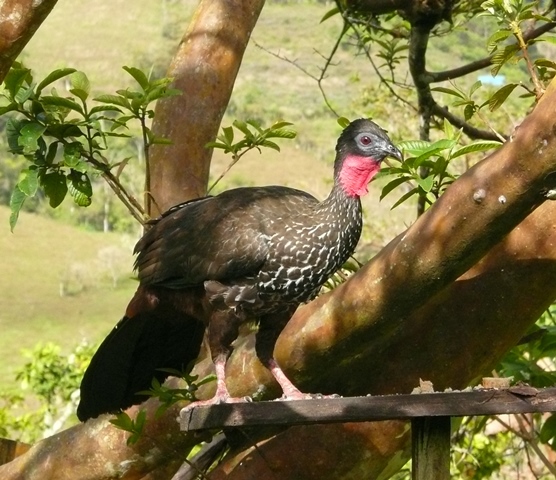 Don Rigo wanted this one for the pot!

Here on the slopes of the Turrialba Volcano we are at the upper limit of elevation for the Crested Guan (Penelope purpurascens). In fact, the only one I had ever seen here was a neighbour’s semi-domesticated bird, caught much lower down in emaciated condition, so I was told. Above is a picture of the bird at our house, where it decided to hang out for a week or two. We finally tired of the raucous screams and large quantities of droppings on the veranda and allowed neighbour Carlos’s father, don Rigoberto, to “look after it”. Luckily, its owner arrived lickety-split on his bike to rescue the bird from don Rigo’s tender care.

It was with some surprise that I found two Crested Guans high in trees up at San Rafael one early morning this week. I almost wrote them off as chachalacas because I was still intent on scanning for the Ornate Hawk-eagle that was the subject of an earlier post of mine. But guans are twice the size of chachalacas, and so I soon spotted the very obvious difference. The native guan species in this area is the Black Guan (Chamaepetes unicolor) disappeared from this area long ago, victims of hunting for the pot or of habitat destruction, yet there was a report not too long ago of that species from a forest patch just up the road here in the village.