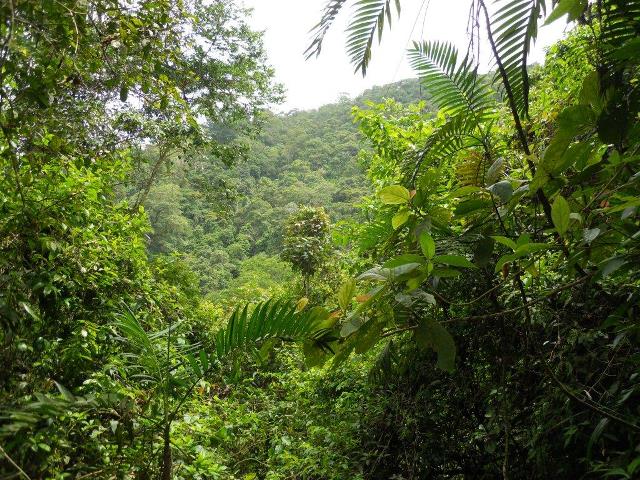 The San Diego location is only a twenty-minute walk from home. It consists of just a couple of cabins and is a favourite of mine for several reasons. Quite apart from Chalo and Hannia Porras’s cabin and the delicious food Hannia makes, it’s at a lower elevation with thick forest and attracts many species that can’t be found here in the village. There is also a rough track down from don Jorge’s cabin to a pretty spot with a small waterfall on the Quebrada La Loca.

Quebrada La Loca after a scramble down from San Diego

This week’s surprise, a Striped Cuckoo (Tapera naevia) was found and photographed close-up by Chalo (photo to follow) at the edge of his banana and plantain field. This is now the second time, to my knowledge, that this species has appeared locally. It’s one of the few species that my wife has seen while I have not, a fact of which she is particularly proud. It showed up outside the library in Guayabo (below the Guayabo National Monument) a few years back (see my earlier post).

Bad haircut but a beautiful bird

Identification is not really a problem, since the only other similar bird, the Pheasant Cuckoo, is a Pacific bird not found in our region (see p. 174 of the new edition of Garrigues and Dean’s The Birds of Costa Rica). Chalo noted that it raises and lowers its crest with some frequency. It is said to be a fairly common bird in the Caribbean lowlands, to 1100 m, which is about the height of the San Diego cabins.

The three fairly rare species that I noted here in San Antonio recently, Cape May Warbler, Gray Catbird and Yellow-breasted Chat, have now not been seen for almost a week. The Green Heron, on the other hand, continues to fish on my small koi ponds. Fortunately, and unlike his big brother the Great Blue Heron, he has so far restricted himself to small fry.

On Saturday, in two days’ time, I hope to repeat the trek I once made from Bajos del Volcán, high up just below the volcano, to Suerre near Jiménez on the San José-Limón main road. This time, it will be a two-day hike with an overnight in a rough cabin. Also, on March 12th, I’ll do my first official stint as a local bird guide with Serendipity Adventures (http://www.serendipityadventures.com/aboutSerendipityCostaRica/contactUs.htm), who are based in our village.