Costa Rica is blessed with a profusion of hummingbird species. And yet, unless we visit feeders that have been specifically placed, usually at tourist sites, to attract various species, we will record only a handful of hummingbird species on each birding excursion. Such was again the case when John Beer and I descended from the Turrialba-Siquirres main road to the Rio Pacuare to investigate a site not much visited by anyone other than river-rafters.

Our target bird for the day was the Bronze-tailed Plumeleteer (Chalybura urochrysia), a hummingbird of the Caribbean lowlands that John had photographed there earlier in the week (photo above). This species seems to be common all along the Rio Pacuare and is best identified by its red feet. First impression is of an all-dark, fairly large hummer, but John’s photos here bring out the colours: 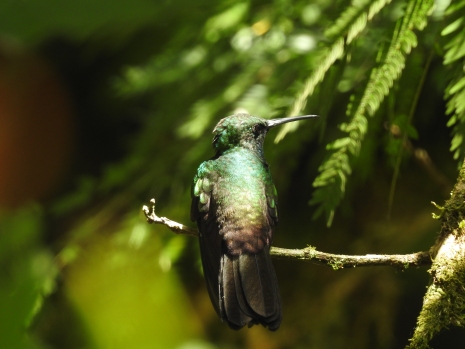 The only other hummingbird that stopped long enough for us to identify was the Long-billed Hermit (Phaethornis longirostris), which I have rarely seen in the Turrialba area but have now recorded twice this week. in different locations. I here attach a file photo that shows this large hummer, which, although rather drably attired, is nonetheless a graceful and impressive bird that will delight any observer.

This hermit has not yet appeared in San Antonio, to my knowledge, though its range does extend to around 1200 m elevation. It prefers a forest environment. We found it as it visited a patch of the same heliconias that attracted the plumeleteer.

Our drive down the dirt road to the river began with a beautiful view of a guaco, or Laughing Falcon (Herpototheres cachinnans). After sitting quietly for a while, it laughed at us from its perch, and then again in flight as it moved away. 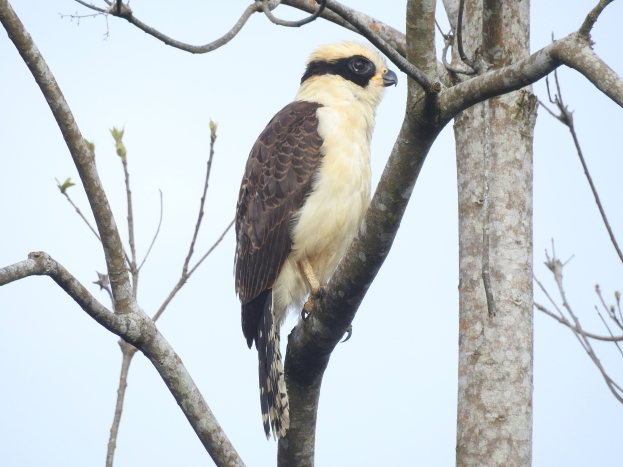 Laughing Falcon, no doubt on the look-out for its favourite snack – snakes! Photo by John Beer.

A solitary and seemingly disoriented Gray-headed Chachalaca (Ortalis cinereiceps) flew in next to the Laughing Falcon before realizing it was in the wrong location:

Oh oh! Who’s that sitting over to my left! Photo by John Beer.

Once on the river we saw few aquatic species, but a Fasciated Tiger-Heron (Tigrisoma fasciatum) stood on a rocky bank in mid-stream. We thought at first, at a distance, that we might be looking at a Rufescent Tiger-Heron (Tigrisoma lineatum) because of the low elevation, but the latter species rarely appears out in the open, while fasciatum is much at home on fast-flowing, rocky rivers. However, this is also the species that is eating my koi in the garden pond! 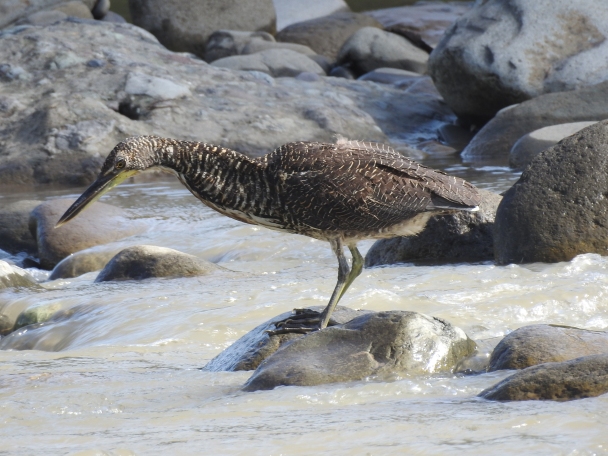 Fasciated Tiger-Heron on the Rio Pacuare; photo by John Beer

If you’re down near this location in the heat of the day, bring your swimsuit!

You can find more photos on the morning’s checklist at: