August is generally considered the slowest birding month in Costa Rica. Migration season will not begin for most species until September or even October. However, bird-watching in Costa Rica is still a wonderful experience even in August and even when it’s just the usual species in your own back yard. This morning, as usual, I rose at just before 5.00 am to the last hoots and toots of a Tropical Screech-Owl (Megascops choliba) and a Mottled Owl (Ciccaba virgata). Friend Larry Waddell took the picture below on an earlier occasion on the walking path at Cabañas El Bosque, San Rafael de Santa Cruz de Turrialba. 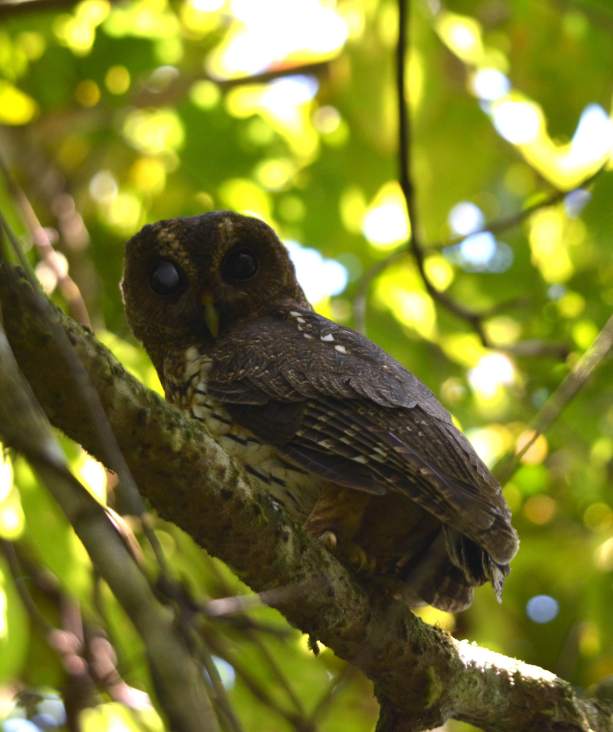 Mottled Owl at its day roost in nearby San Rafael

The first diurnal species were already calling. This month the first to be heard is often the noisy Brown Jay (Psilorhinus morio) but this morning the first bird sounds I hear are the thin morning call of a perched male Rufous-tailed Hummingbird (Amazilia tlacatl) and the high twittering of a small group of Bananaquits (Coereba flaviola) at the back patio.

Both the Rufous-tailed Hummingbird and the Bananaquit nest in the garden each year, but so too does Cabanis’s Wren (Cantorchilus modestus), formerly known as the Plain Wren. This morning its sudden loud call from 5 yards away almost makes me spill my morning coffee.

Cabanis’s Wren, preparing to nest in my garden, courtesy of Larry Waddell

Another fine singer is the pretty Orange-billed Nightingale-Thrush (Catharus aurantiirostris), and today for the first time I find two recently fledged youngsters accompanied by at least one parent bird. The file picture below is of a bird that bumped into our window and was rescued and photographed by friend Stephanie DeLaGarza. 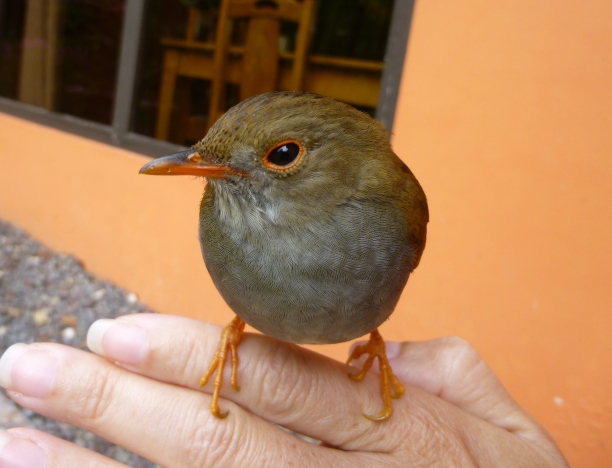 The Clay-colored Thrush (Turdus grayi) is always here but is now in post-nesting season and no longer singing. The Buff-throated Saltator (Saltator maximus) is, however, now just as vocal as the Grayish Saltator (Saltator coerulescens) and Black-headed Saltator (Saltator atriceps). The latter two species seem to have almost finished rearing their young, while maximus is still accompanied by juveniles.

Perhaps the least seen among the saltators in my garden, the Buff-throated Saltator

The lone tanager species here today was the very common but also very attractive Passerini’s Tanager (Ramphocelus passerinii). It was formerly lumped with Cherrie’s Tanager (Ramphocelus costaricensis) and was termed the Scarlet-rumped Tanager. First-time visitors to Costa Rica are often surprised to be able to see so easily such a beautiful bird. 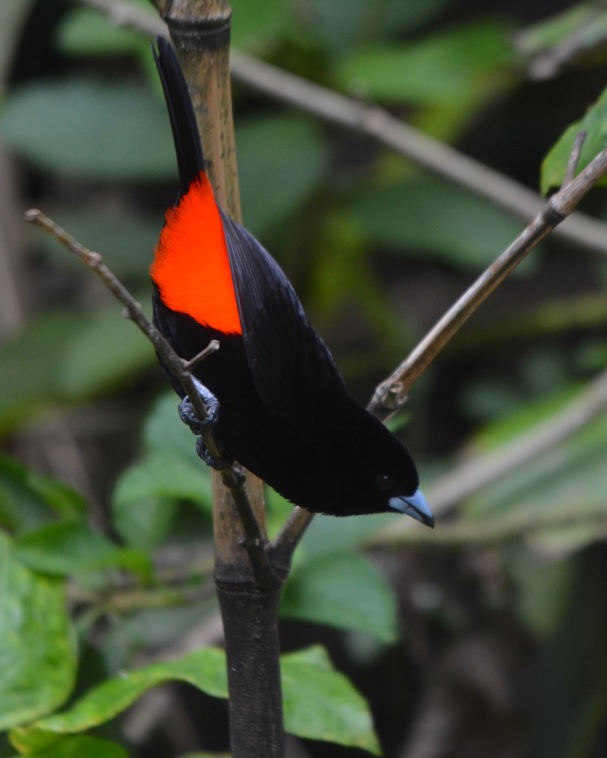 It’s strange indeed not to report other tanager species today but at least the Keel-billed Toucan (Ramphastos sulfuratus) and the endemic Crimson-fronted Parakeet (Aratinga finschi) both showed up. As a boy growing up in Yorkshire, England, I would have found a sighting of either of these exotics a first-class treat. The beautiful pictures below, taken at other times and places, are courtesy of friends and neighbours John and Sean Beer: 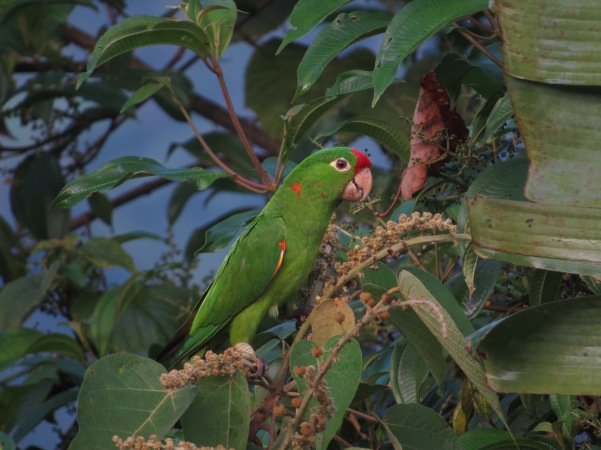 All the species portrayed so far have appeared almost every day so far this August. However, there are always a few mild surprises, the chief of which today was a loudly calling female Golden-olive Woodpecker (Colaptes rubiginosus).  John’s photo is from the Rio Roca at Bonilla Arriba, a little higher up the mountain. 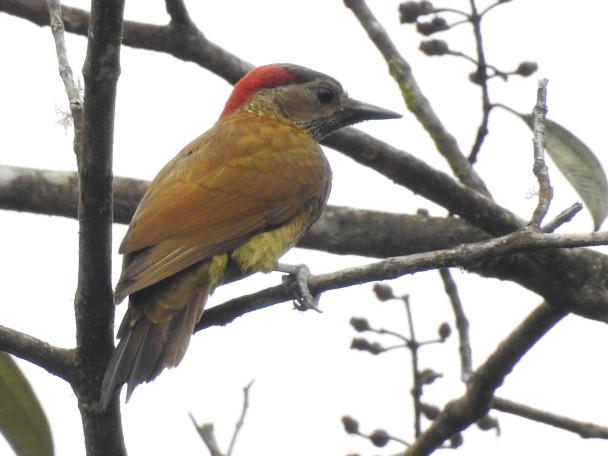 Female Golden-olive Woodpecker a little higher up the volcano slope

Also unexpected in the early morning was a Yellow-crowned Euphonia (Euphonia luteicapilla) giving its two- and sometimes three-note call from the top of a guayabo:

At the end of the day a final visitor not always seen was a Tropical Pewee (Contopus cinereus). If it appears at all, it seems to be in the same spot near the entrance gate and always late in the day. 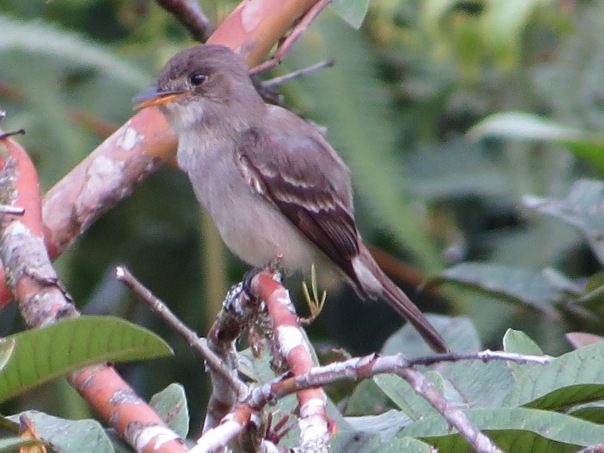 Yes, in July and August I’m sometimes tempted to think that nothing much happened in the garden, and yet it’s probably the birds we see daily that are our chief delight. I think I have easily enough daily species to write a follow-up post, August Part II!