You’ll find plenty of secondary forest at Balalaica, not far from Pavones on one side and La Suiza on the other! The father-and-son pairing of Walter and Steven Aguilar (Steven is a top-notch nature guide) escorted me there at the weeend. Thanks to them I was able to add one more species to my life list of Costa Rican birds, the Tawny-chested Flycatcher (Aphanotriccus capitalis). This is an uncommon species and is to be found only in eastern Nicaragua and Costa Rica, on the Caribbean side.  The number of flycatchers in this country comes to a bewildering total of 82 species (pp. 226-252 in Garrigues and Dean), many of which I have still not seen. We had 10 different ones on this trip. The tawny chest makes the Tawny-chested easier to identify than most but I am again stuck for photos, preferably taken locally. Please contact me if you can help!

Skip to the end of this post for the full day’s list, which includes a few that Steven found but I missed. Unfortunately, two of those would also been life birds for me! If I only hear them they don’t go on the life list. I thus reserve Tawny-crowned Greenlet and Scaly-breasted Wren for another day!

Rarest bird was probably the Ashy-throated Chlorospingus (Chlorospingus canigularis), which has a very reduced range in Costa Rica. The other two species of Chlorospingus are easy to find in the mountains but I have rarely seen the very plainly attired canigularis, which likes to stick to the treetops.

I also had my first really good look at a Buff-throated Foliage-gleaner (Automolus ochrolaemus) that stopped its gleaning and almost hopped out into the open at the side of the path. Here’s one that John Beer, Larry Waddell and I found and that John saw very well at Angostura Dam, Turrialba, a while back: 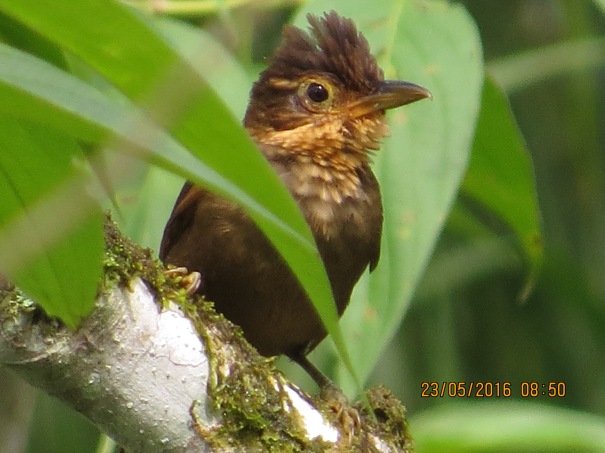 All three of us also spent a good half hour down on our knees in thick undergrowth by a muddy watercourse trying to coax out a pair of loud Thicket Antpittas (Hylopezus dives). Check out the antpittas in the bird guide. Nobody stole their tails; they just don’t have any! If you’re using Stiles & Skutch as your guidebook, be aware that this particular antpitta was then called the Fulvous-bellied Antpitta (Hylopezus fulviventris).