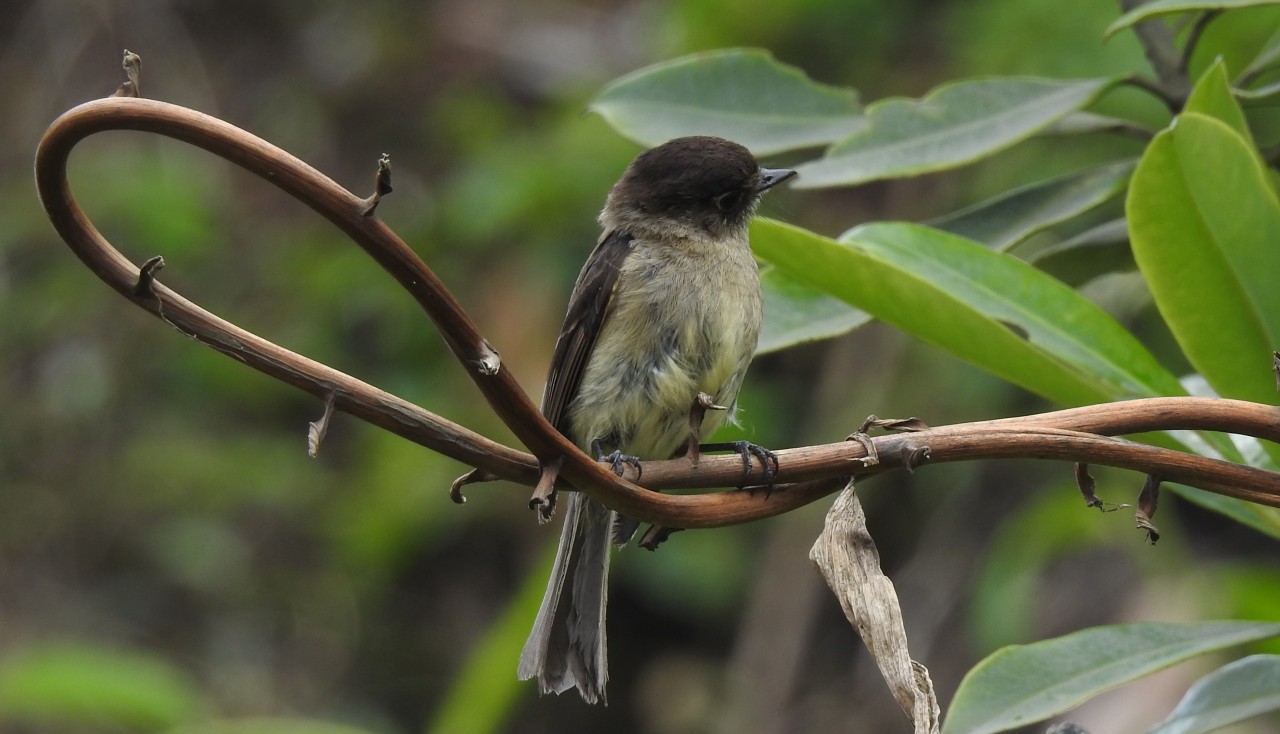 The road from Santa Cruz to Los Bajos del Volcán on the eastern flank of the Turrialba Volcano has improved considerably in recent years, but it still requires a good two hours to cover the 18 km distance in a 4-wheel drive vehicle. The trip is a reward in itself, as it passes through the cloud forest reserve before finally plunging down from an elevation of 2400 metres to the cabins and dairy farms at Los Bajos.

If you are birding in the Turrialba area, this is one of the prime locations for finding highland species. The most sought-after species for foreign visitors is surely the Resplendent Quetzal (Pharomacrus mocinno) and, despite the recent ash falls from the volcano, the area seems to remain mostly unaffected in terms of bird populations. I visit the high areas of the Turrialba Volcano with some frequency. On this occasion, I was again fortunate to be able to accompany John and Milena Beer all the way to Los Bajos.Virtually the first highland bird to appear on this trip, just above the community of Las Abras, was a male Resplendent Quetzal, which we found thanks to Milena’s sharp eyes. Because of the dense vegetation, John was unable to get a photo on this occasion, but here is a shot that friend Larry Waddell took recently, also under difficult circumstances, at El Tapojo:

Quetzal in the mist at El Tapojo, courtesy of Larry Waddell

In general, in these highland habitats you encounter the same species and only occasionally does something completely new appear. There is, however, considerable variation in the populations of the common species. Whether this has recently been a function of the renewed activity of the volcano is hard to tell. On this particular trip, certain common species, e.g. Slaty Flowpiercer, were absent, while others appeared in larger numbers than on other trips.

We found the Mountain Thrush (Turdus plebejus) particularly numerous this time. The first-time birder here will not always find it easy to distinguish between this species and Costa Rica’s national bird, the Clay-colored Thrush ((Turdus grayi). The former is often shown as being a grey bird and the latter as a brown one but this distinction is far from clear in the field. Since plebejus is the mountain version of grayi, elevation helps with identification, but the Clay-colored is found as high as 2500 m all year round, while the Mountain Thrush can be found down to 900 m in the wet season, which is usually the second half of the year. Indeed, we did also find and hear several grayi at Los Bajos.

John’s photos of the two species point out the main differences, with the colour of the bill being a prominent field mark. 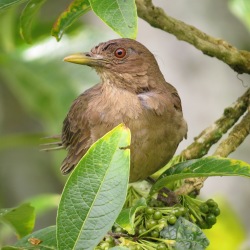 Clay-colored Thrush in nearby Santa Rosa

On this occasion, with migration season almost at an end, we found only three warbler species, none of them a migrant. Outnumbering the Collared Redstart (Myioborus torquatus) this time was the Black-cheeked Warbler (Basileuterus melanogenys). This highland resident is endemic to Costa Rica and western Panama. It emits a high twittering or chattering and seems to like bamboo.

We had fleeting views of another resident highland warbler, also endemic to Costa Rica and western Panama, the Flame-throated Warbler (Oreothlypis gutturalis). John’s photo below is from an earlier visit to Los Bajos del Volcán Turrialba. The male’s throat is more orange than yellow but, at least in our area, it is hard to find a bird with a throat colour that matches the red in the field guide illustrations.

Hummingbirds were restricted to just three species, with the notable absence of the Fiery-throated Hummingbird. The elevation here is a good bit lower than at nearby El Tapojo, which means that in addition to the loudly chirping Lesser Violetear (Colibri thalassinus) – formerly Green Violetear – we also found Purple-throated Mountain-gem (Lampornis calolaemus). The male in the following file photo by Karel Straatman shows what we were able to see, only fleetingly this time, at Los Bajos:

Flycatchers were few and far between but it seems the Black-capped Flycatcher (Empidonax atriceps), another resident highland species endemic to Costa Rica and western Panama, never fails to appear. Here’s a very nice shot that John was able to take:

Unless otherwise indicated, all photographs were taken on this visit and by John Beer.

You can find the full list of the morning’s sightings at: