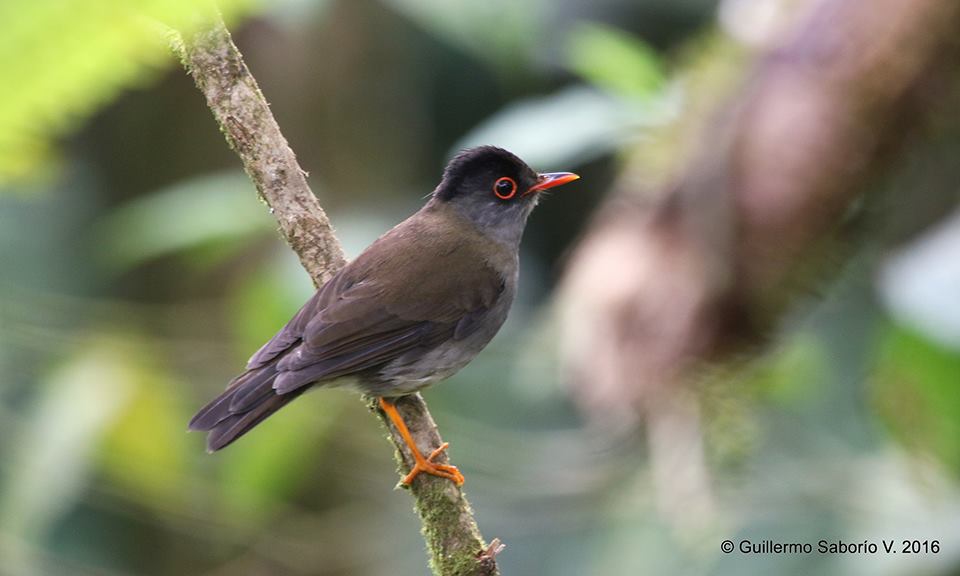 Torrential rain falls as I write this, and it looks like yesterday’s trip to Tapantí National Park near Paraíso was just in time to avoid the rainy season. It’s just as well. My only previous visit to this the second-biggest national park in Costa Rica brought me a tally of 3 bird sightings. How those birds could see through the deluge I’ll never know. The walk this time with the Domingos Pajareros (Sunday Birders) group, led by Ernesto Carman of Get Your Birds! Tours, was outstanding both for the beauty of the walk and for the number of hard-to-find species recorded. 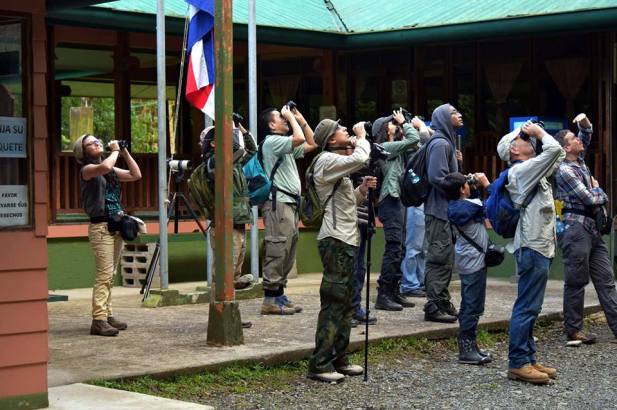 Is it a bird, is it a plane? Ernesto is on the far right, while Steven is hidden behind the post. I’m at the front to try and compensate for poor eyesight.

I’m accustomed to adding perhaps one new species per month to my Costa Rican list, but recent excursions, first with friend John Beer to out-of-the-way places, and now with the help of some of the best guides in the country, have pushed me up well beyond the 500 species boundary. At Tapantí National Park, I again missed several key species but still chalked up 6 life birds. Here they are, with some brief remarks. Unfortunately, I have no access to photos from the actual excursion day. 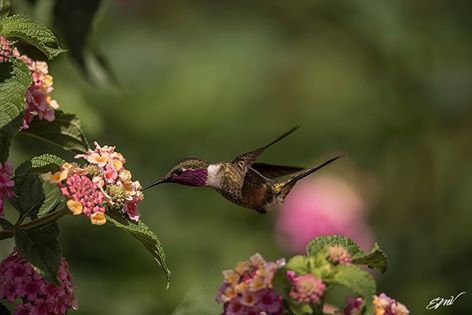 The Magenta-throated Woodstar (great name!) (Calliphlox bryantae) is another species found only in Costa Rica and western Panama, at middle to high elevations. The distinctive white patch on the rump cannot be seen on the male in Edgar’s excellent photo above. It is rated as uncommon and was hailed as a good find by all members of the group. 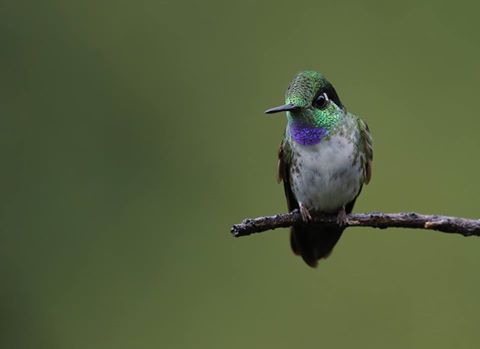 The White-bellied Mountain-Gem (Lampornis hemileucis) is also considered uncommon, but not. it seems, at Tapantí, where we observed several individuals. Of the three species of Mountain-Gem, this is the only one where the female does not have cinnamon underparts. The main field mark to look for is the white post-ocular stripe, common to all Mountain-Gems, and, in this species, the white underparts. It’s a Caribbean species found at lower to middle elevations. On the Turrialba Volcano, the Purple-throated Mountain-Gem is easily found, while the White-throated Mountain-Gem is found further south and east, in the Talamanca range. All three species are endemic to Costa Rica and western Panama.

Amazingly, the group recorded 14 different species of hummingbird on this walk.

Another of those fascinatingly distinctive bird names here in Costa Rica! The two species of xenops lead off the furnariidae family in the field guide The Birds of Costa Rica (Garrigues & Dean). These small birds with short, upturned bills clamber around acrobatically in heavy vegetation, often hanging upside down. The Plain Xenops (Xenops minutus) is generally considered uncommon but is easy enough to find in our area below 1500 m. Later in the day, after the main group of birders had dispersed, Steven Aguilar and I ran into one of those mixed flocks of forest birds of which we often dream. A rare find in the flock was the Streaked Xenops (Xenops rutilens), which generally favours higher elevations. A sighting to make anyone’s day! 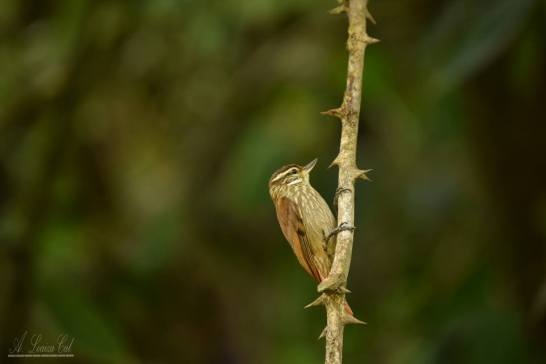 Bird of the day

The bird of the day, however, was the even rarer Buff-fronted Foliage-Gleaner (Philydor rufum), which extracted gasps of delight from Steven. The Costa Rican foliage-gleaners, all five of them, plus similar furnariidae with wonderful names like Tawny-throated Leaftosser, Stdriped Woodhaunter and Streak-breasted Treehunter, are birds of dense undergrowth and as such are modestly attired in drab plumage. The Buff-fronted Foliage-Gleaner’s plumage is rather brighter, as Arnoldo García’s photo below shows. 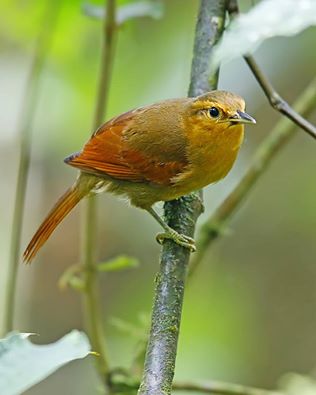 Becards were once classed as flycatchers but are now included with the tityras. There are 5 becard species and today’s big mixed flock included a male Black-and-white Becard (Pachyrampus albogriseus), a rare middle-elevation species completely new to me. I did not see the chestnut-capped female. The somewhat similar male White-winged Becard (Pachyramphus polychopterus) prefers lowland environments and is easier to find. I have seen it close to home at San Diego at an elevation of around 1000 m. Its back is black rather than grey and it has a completely black head, lacking the white stripe above the lores that can be seen, even if not too well, in Guillermo Saborío’s photo below. 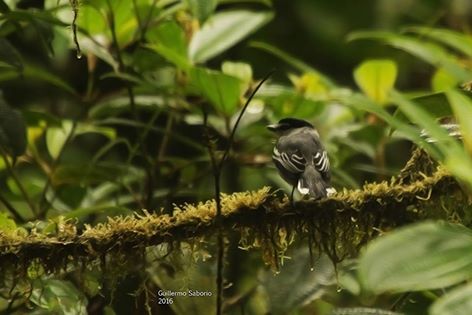 Finally, another more common bird, the Black-headed Nightingale-Thrush (Catharus mexicanus), was one that I had sometimes heard but never seen until this visit to Tapantí. The dark iris separates it readily from the Slaty-backed Nightingale-Thrush (Catharus fuscater), another fine singer found at slightly higher elevations and also heard and seen during this excursion. 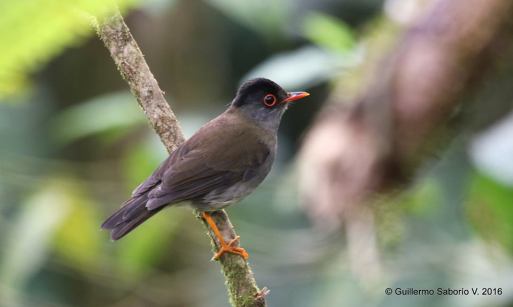 The Tapantí National Park can be entered both from below, from the beautiful Orosi Valley, at its main entrance, and also from above on the main road that takes you from Cartago to Cerro de la Muerte and the south of the country. Congratulations and thanks again to Domingos Pajareros. The full day’s species list for the group led by Ernesto can be found at http://ebird.org/ebird/view/checklist/S31545841 and includes some species that Steven and I did not manage to find.