At the invitation of Daniel Martinez I spent a beautiful sunny morning on the slopes of the Irazú Volcano above Cartago and the small rural town of Llano Grande. The area is within easy reach of my base here above Turrialba, but I rarely have the chance to do any birdwatching there. It was most instructive to find that there are numerous differences between what can be expected up high on the respective volcano slopes, even though they are separated by only a few kilometers.

Our visit was to a private reserve, Los Retes, close to Prusia at an elevation of between 2100 m and 2700 m, which makes for a good comparison with the corresponding area of the Turrialba Volcano with which I am much more familiar. The highland villages offer a very pleasant rural environment, with hard-working folks up at the crack of dawn to begin their day dressed against the cold. I saw in a couple of different places that oxen  are still being used for agricultural work, perhaps for locations inaccessible to tractors.

Our first notable bird was a perched Merlin (Falco colombarius). While this small falcon has of course been reported from our area, there are many more sightings from the Irazú area. I have not personally found it below the Turrialba Volcano, but today we had two individuals at separate locations. Bird number two took us quite a while to identify as, perched high, it chowed down on some unfortunate passerine. Daniel could get a photo only from a distance.

Just after dawn we heard the loud calls of the Buffy-crowned Wood-partridge (Dendrortyx leucophrys) at different locations; Daniel even caught a brief glimpse of one, but I am still unable to add the species to my life list because I missed it each time! This bird is the famous chirrascuá, with whose call my neighbour Fabio Orlando has a lifetime’s familiarity. Unfortunately, I have so far not detected its presence in the Turrialba Volcano area.

Our Turrialba Volcano hummingbirds are in some cases the same species at Irazú. There are, however, some striking differences. Where the Fiery-throated Hummingbird is so very common in our area, the most frequent hummer at Irazú that morning was the much larger and perhaps even more beautiful Green Violetear (Colibri thalasinnus). I have seen this species well only once, strangely, here opposite the house, in the San Antonio churchyard. Its territorial behaviour often compels it to perch and advertise loudly from a prominent perch, which gives the observer ample opportunity to admire its brilliant green plumage and the violet ear-patch. We did not find any Fiery-throated hummers at all. 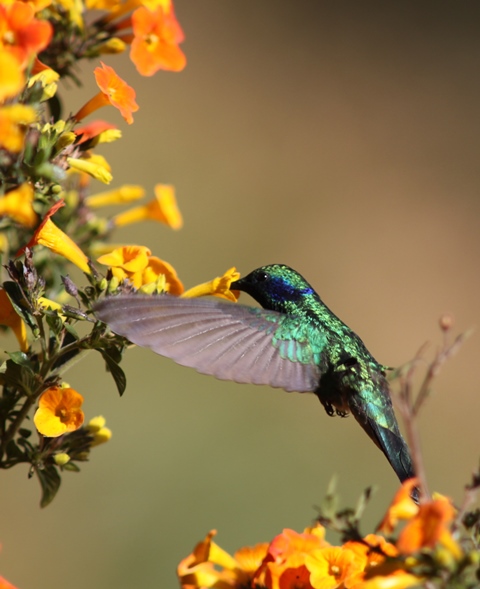 Another bird that we saw and heard at numerous sites was the handsome Acorn Woodpecker (Melanerpes formicivorus), a species very familiar to North American birders. It seems much less common here at the Turrialba Volcano, where the Hairy Woodpecker is the one most often seen. Here’s a nice shot taken on another occasion by friend Karel Straatman: 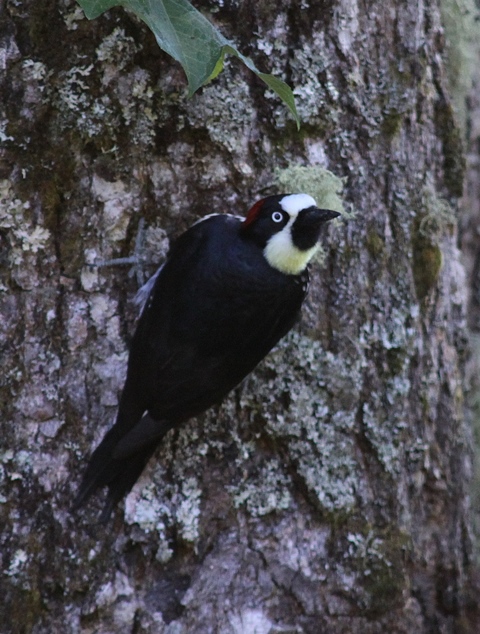 Who, me? An Acorn Woodpecker seemingly caught in the act

Perhaps the two best species for the day, for me at least, were the Dark Pewee (Contupus lugubris) and the Rufous-browed Peppershrike (Cyclarhis gujanensis), each of which I had previously seen only once, and then very briefly. Yes, the name of the second one is correct, even though my wife thought I was pulling her leg when I told her what I had seen. Daniel located them both by their calls, and perhaps I will now be able to do so in the future. The Peppershrike is a fairly small (5 1/2 inches), mostly green bird that hides high up in the canopy, but it has a very loud, ringing call. It may turn out that both species are more common here at Turrialba than I thought, but there are few reports for our area of either species in eBird’s invaluable database. 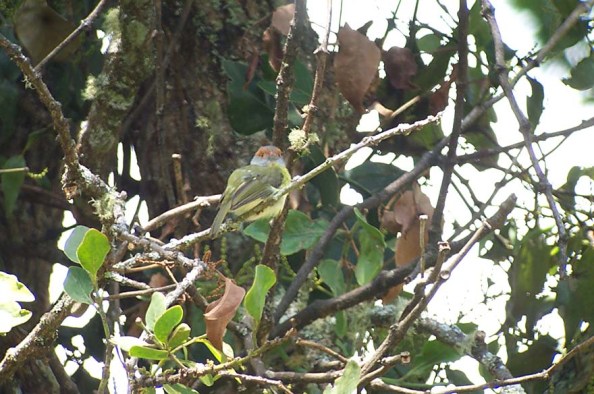 The “Rufous-browed big vireo”, Vireón Cejirrufo, as it goes in Spanish, courtesy of Richard Garrigues

A sustained close view of a Long-tailed Silky-flycatcher (Ptilogonys caudatus) has convinced me that this is one of the most beautiful species to be found anywhere in the country. We had several flocks in most locations, which makes me think that it is more common at Irazú than at Turrialba, where I have not seen it lately. On the other hand, the Black-and-yellow Silky-flycatcher, common in the Turrialba highlands, was completely absent. We also failed to record any chlorospingus species. Very strange.

I have commented previously on the Flame-throated Warbler (Oreothrypis gutturalis), noting that birds on the Turrialba slope seem to have yellow-orange rather than the orange-red throat illustrated in Garrigues & Dean. At Irazú we saw quite a few individuals of this lovely species, but now all with orange-red throats! Can diet be responsible for this?

Flame-throated Warbler at Cerro de la Muerte, on the other side of Cartago, has the yellow-orange throat of Turrialba birds

Finally, another bird with flame in its name (because of the male’s orange-red plumage), the Flame-colored Tanager (Piranga bidentata), is also frequently observed at Irazú but seemingly very rarely at Turrialba. 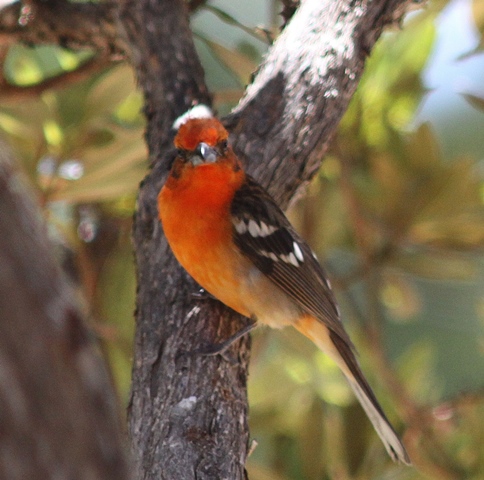 If you’re new to Costa Rica, be careful with the id on this one because the female Flame-colored Tanager is yellow.