Here’s a quick report on the very few birds that I was able to glimpse through mist and heavy rain during an adventurous two-day hike from just up below the Turrialba Volcano down to the small town of Suerre, located just off the main San Joseo-Limon road. This is day one, in the highlands above our village. Landscape photographs are by kind courtesy of Carlos Daniel Trejos Angulo, while, unless otherwise noted, friend Karel Straatman contributed the bird photographs from his extensive collection. 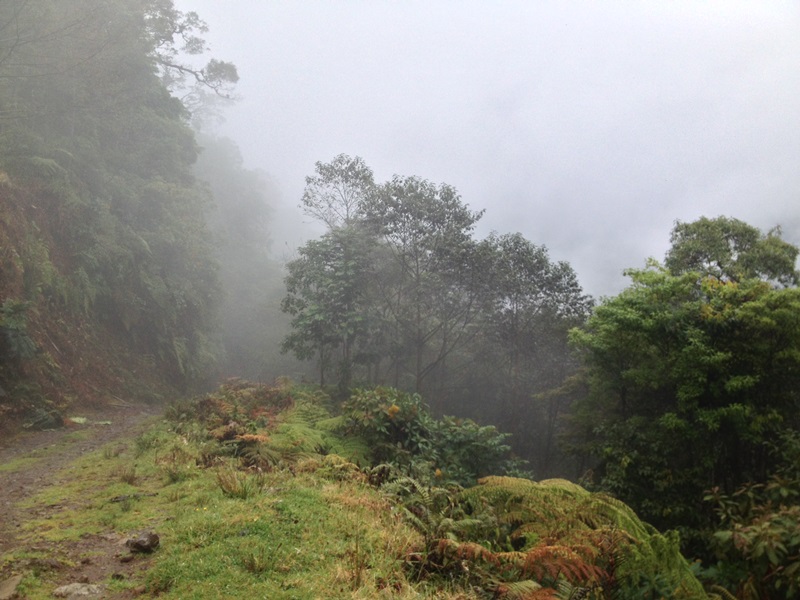 From Las Abras to Los Bajos

Rain replaced the last few days of sunshine. The little bus couldn’t get our group very far up the mountain road from Santa Cruz, so we began the walk in dismal weather at Las Abras, the last dairy outpost.  It turned out that I was the only birdwatcher, and because of the weather and the forced march that ensued time for birding was at an absolute minimum. Nevertheless, the good mood of my companions, all nature enthusiasts from Turrialba, and the beautiful stillness of the environment made for a really memorable hike.

Long-tailed silky-flycatchers were the first mountain species that I was able to find, mostly because of their inimitable and wooden-sounding call. Best views on the early stretch were of the common little resident warbler below, the Collared Redstart (Myioborus torquatus)

Collared Redstart: The grey background captures the mood of the cloud forest perfectly

At one point we had a brief look at a male red-bellied trogon, almost certainly the Collared Trogon (Trogon collaris), which is common at this elevation, though the line between red and orange is often blurry, so the Orange-bellied Trogon (Trogon aurantiiventris) cannot be totally discounted.

A male Collared Trogon, by kind courtesy of Richard Garrigues

A Black Guan (Chamaepetes unicolor) sitting up high in a tree near La Lorena was written off by some as a Black Vulture, but the blue facial skin is an obvious difference when you see the bird’s head.

Black Guan – blue face on black gives it away 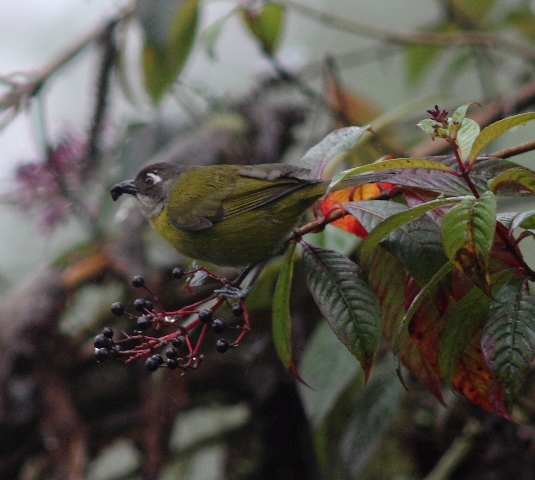 The recent change of name makes this the Common Chlorospingus

We reached Los Bajos sometime around noon, or perhaps a little later. I was not to be treated to the amazing sight of 10 Resplendent Quetzals that had greeted me on a prior occasion, as the weather made flight difficult for most bird species. As we descended from Los Bajos, the beautiful song of the Black-faced Solitaire (Myadestes melanops) could be heard from every forest patch. 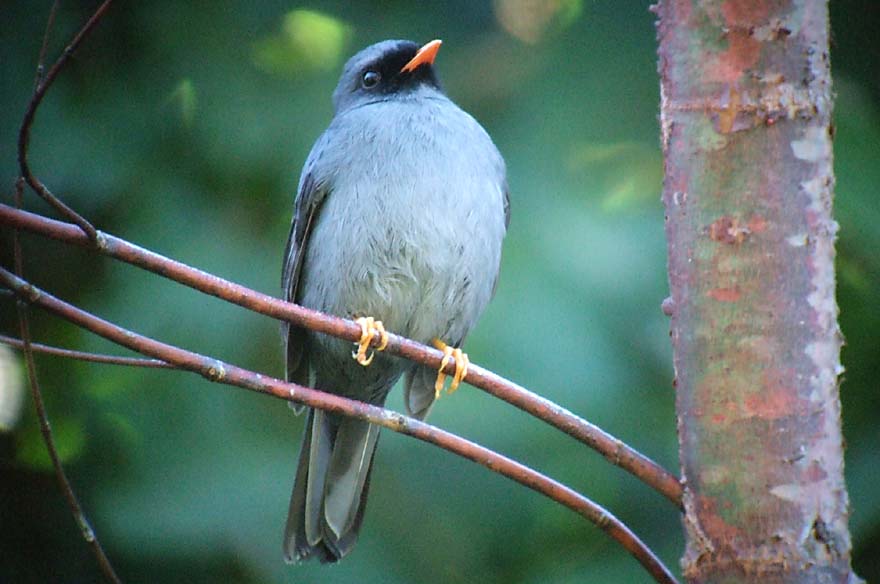 My last sighting in the high lands was of a Ruddy Treerunner (Margarornis rubiginosus). For the time being, I can find no suitable photograph of this highland species. It is considered common, but, like many other “common” Costa Rican birds, it has eluded me for eight years! Can anyone help with a Costa Rican photo of this one?

The toughest part of the hike was yet to come because Los Arenales and the rickety cabin that serves as overnight accommodation was still almost three hours away. Birdwatching became impossible as we pressed to get there before getting caught in the dark. The scenery is breathtaking. A side excursion to a small lake brought no grebes or herons this time. The photograph below finishes today’s post but is a sample of the natural beauty that accompanied us on day 2, subject of my next post.

Just one of many beautiful sights on the trail