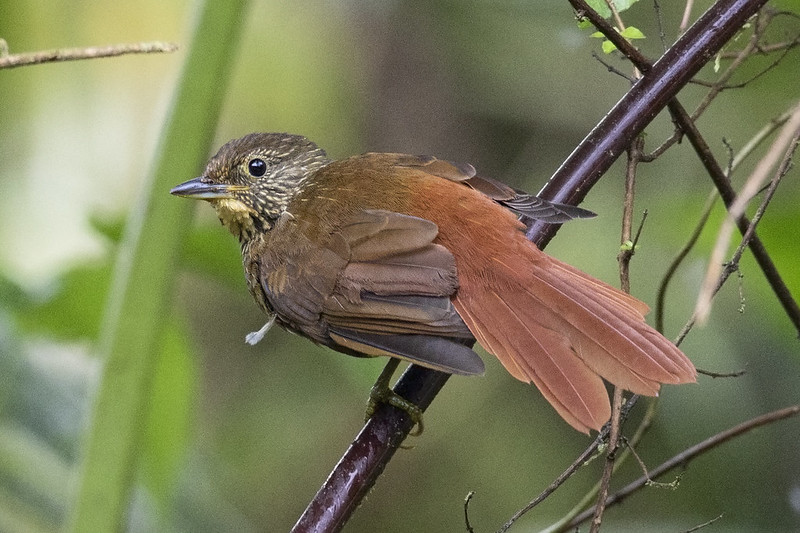 Yet another species has put in an appearance close to my home on the Turrialba Volcano slope. I’m sure it’s always present there, but its skulking behaviour as it searches through clusters of dead leaves and moss in the lower levels of the forest makes it very hard to detect. Steven, John and Milena found the Lineated Foliage-Gleaner on the Los Bajos road above the tiny community of Las Abras. The photos were hard to obtain but they did allow conclusive identification:

Here, courtesy of local guide and photographer Guillermo Saborío is what a full view looks like, if you can get them out of the undegrowth:

Other Costa Rican foliage-gleaners lack the streaks indicated in the Spanish name, Trepamusgos lineado – literally the ‘lineated moss-climber’. I have written previously about the most commonly encountered foliage-gleaner in our area, the Buff-throated Foliage-Gleaner (Automolus ochrolaemus). Its habits are similar and it too has been recorded only very infrequently from the Turrialba Volcano slope. However, despite sharing a buffy throat, this species is unlikely to be confused with the Lineated Foliage-Gleaner:

A more likely source of confusion is perhaps the woodcreepers, though generally they have much longer bills, or even the Ruddy Treerunner (Margarornis rubiginosus). The latter is a much more common high-country bird and is relatively easy to find in mixed flocks on the volcano roads.

With full migration season now approaching, Costa Rica’s resident species will soon be joined by the usual flood of northern migrants. Milena found the first warbler at Aquiares this week, a Cerulean Warbler (Setophaga cerulea), always one of the first but hard to find. Steven reports them already from Pavones. I’ll keep you posted!