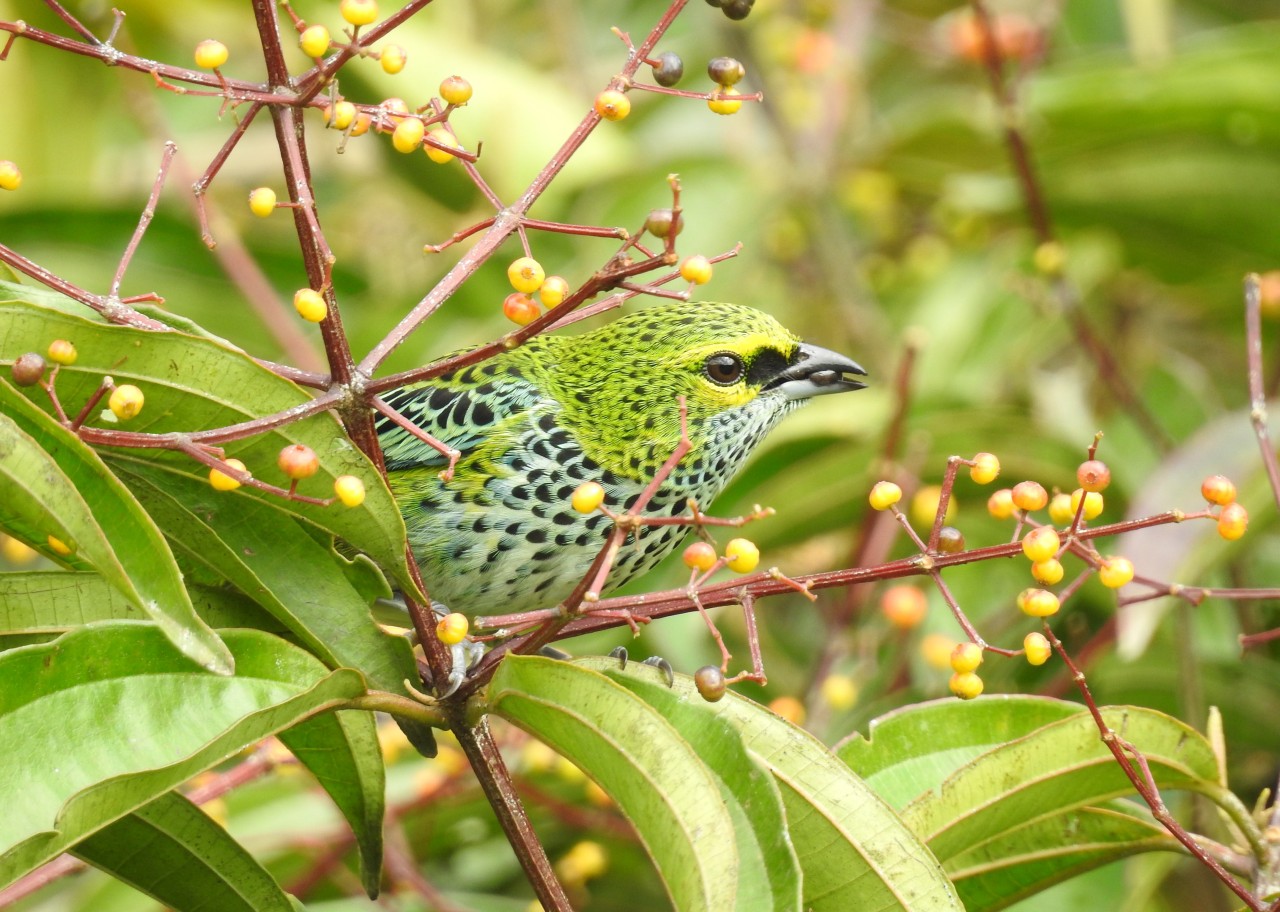 Whatever you do, don’t miss the Las Brisas Reserve if you’re on your way from Turrialba to the Caribbean. On our latest Las Brisas excursion Steven Aguilar and I racked up almost 100 different bird species. The amazing thing is that we would have had many more had we visited owner Erick Berlin’s other reserve just a little further down at La Alegría, because the lowland habitat there is quite different. We had no camera except those in our cellphones, so all photos in this post are from past occasions.

The road from Turrialba via Santa Teresita is the one to take and it is full of great birding opportunities itself. Guayabo National Monument could easily be a profitable side-trip but we wanted to go farther afield since the Monument is only a few kilometers from my house. Almost anywhere with forest habitat along this road could also be scouted, but the first really great location is the Lagunas de Bonilla. These cannot be visited but can be seen beautifully from above from a dirt road that leads to a small hamlet called El Llano.

Our target species here was Snowy Cotinga but no luck this time! Instead, however, we saw or heard almost 50 different species (see our checklist at https://ebird.org/view/checklist/S58044866). The stand-outs for me were Shining Honeycreeper (see my earlier post), Blue Dacnis (Dacnis cayana) and Fasciated Antshrike (Cymbilaimus lineatus):

Our Blue Dacnis this day was in fact the delicately hued female of the species. All dacnis, including the only other Costa Rican species, the much more common Scarlet-thighed Dacnis (Dacnis venusta), have short, warbler-like bills, which immediately distinguish them from the longer-billed honeycreepers. Because of its green body the female Blue Dacnis is also easily separated from the female Scarlet-thighed Dacnis. Even though I had only a brief look I was delighted to see this bird for it has proved quite elusive in the past. Dacnis are considered to be tanagers, by the way.

Another bird that I enjoyed seeing was the little Orange-chinned Parakeet (Brotogeris jugularis), which is not easy to find close to home except in cages.

Unlike parrots, parakeets have pointed tails. In our area the commonest parakeet, the Crimson-fronted Parakeet (Aratinga finschi), is also a good bit larger than our commonest parrot, the White-crowned Parrot (Pionus senilis), called chucuyo locally. It’s worth bearing in mind also that, if you spot a small parakeet, it’s likely to be this noisy species, because the only other candidate would be the even smaller Barred Parakeet (Bolborhynchus lineola), which is usually found only at higher elevations in the central mountain ranges.

Before we even reached Las Brisas we stopped by the roadside not only for the King Vultures mentioned in my earlier post but also for an adult Fasciated Tiger-Heron standing guard among the rocks in one of the streams tumbling down from the Turrialba Volcano. Upon reaching Las Brisas we merely birded at the gate because we wanted to explore a few kilometers further back towards the volcano so as to reach the dairy community of Ojo de Agua. My plan one day is to reach this location on foot from the west via Torito and Bonilla Arriba, not far from my home village of San Antonio, crossing the Rio Roca

The continuation of the road towards Ojo de Agua after Las Brisas has some forest patches on the first part but soon becomes open pasture for dairy cows before rising steeply and petering out into the forest of the volcano slope. I think that part needs some careful exploring in terms of birding. In not much more than one hour at Ojo de Agua we found 18 different species although many were common birds.

Highlights were a pair of Black-faced Solitaires (Myadestes melanops) and at least two Speckled Tanagers (Tangara guttata). The former is the most prized species for the cage-bird trade in Costa Rica because of its beautiful singing but is usually found at rather higher elevations. The Speckled Tanager is a fairly common but rather beautiful bird, as the photo below from an earlier trip to Las Brisas shows:

Erick Berlin very kindly gave us access to Las Brisas as we returned from Ojo de Agua and even invited us to the lower reserve at La Alegría. Please see my next post for Great Birding – Las Brisas Part 2.