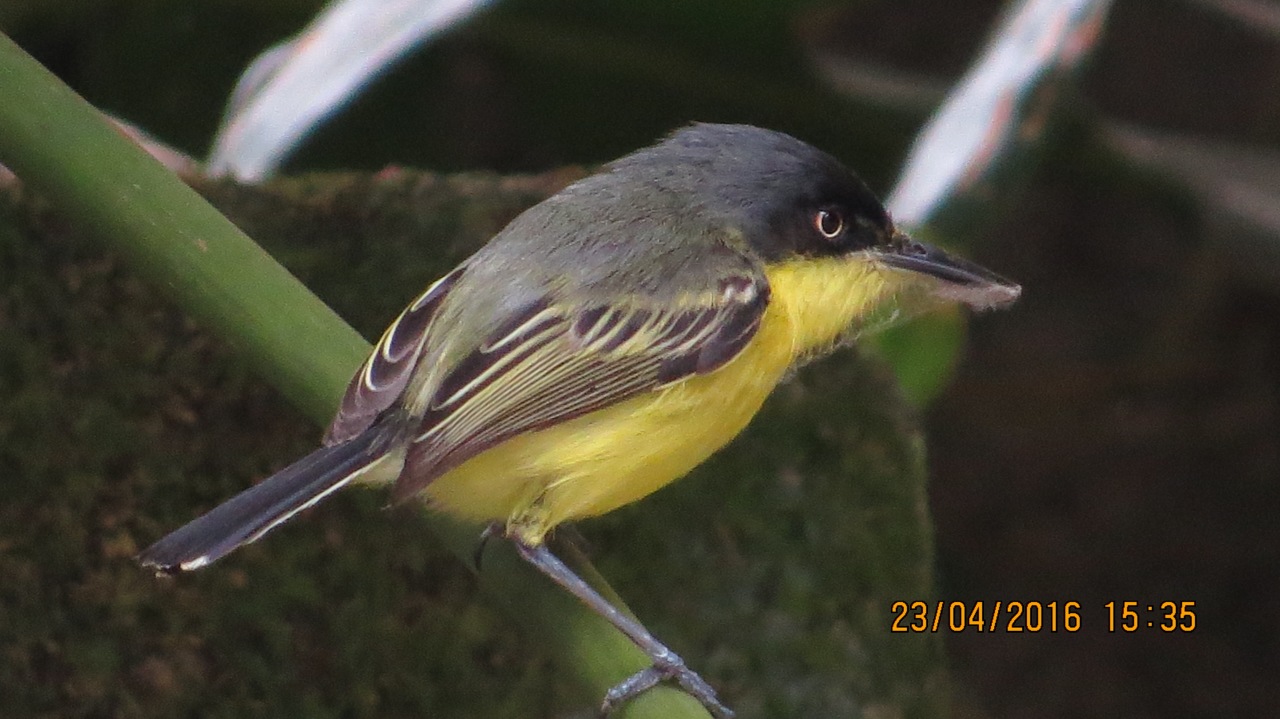 The tiny Common Tody-Flycatcher (Todirostrum cinereum) is a bird commonly found in most Costa Rican gardens. Because of its long, thick bill it is called espatulilla (little spatula). It’s a dainty little black-and-yellow bird with a bright eye and, except when giving its fairly loud, trilling call, it flutters noiselessly amid the foliage.

Here’s the same bird, or perhaps its partner, in John and Milena Beer’s garden in Santa Rosa:

Because of the almost daily presence of the Common Tody-Flycatcher, it’s easy to forget that there are actually 3 species of tody-flycatcher in Costa Rica. Until recently I had practically given up on finding either of the other two, the Slate-headed Tody-Flycatcher (Poecilotriccus sylvia) and the Black-headed Tody-Flycatcher (Todirostrum nigriceps). Actually, these are not rare species but because they prefer forest environments they are much harder to find. Poecilotriccus sylvia, however, seems to be virtually impossible to locate in the Turrialba area. I can find no evidence of recent sightings whatsoever and I dispense with any further consideration.

The Black-headed Tody-Flycatcher is a different matter, with numerous local sightings including some of my own. Glimpses have been only fleeting, however, as this species prefers to stay high in the tree-tops. My nearest sighting to home was at Guayabo National Monument, where I again had only the merest glimpse. This week, however, at Lagunas de Bonilla, John and I were fortunate to spot an individual practically at eye level. The white throat and dark eye are distinctive.

The view over the lakes at Bonilla was beautiful both in the morning rain and a little later when the sun broke through. Note that at Bonilla you have just crossed over from the province of Cartago to that of Limón.

Often there are no ducks or water birds at all to be seen on the surface of the lakes. Access is strictly private and we are only able to look down on them from a good distance above. This time we were able to make out a small group of Lesser Scaup (Aythya affinis). Any diving duck seen in Costa Rica is almost inevitably this species. Go to North America for ducks! It is to be noted that incursions of other duck species did take place here two or three years back, so we live in hope.

To see our species list and additional photos of John’s from a very interesting morning spent at Bonilla check the following link: https://ebird.org/camerica/view/checklist/S50302180

For a look at Bonilla’s toucans, the Yellow-throated and the Keel-billed, see my next post.