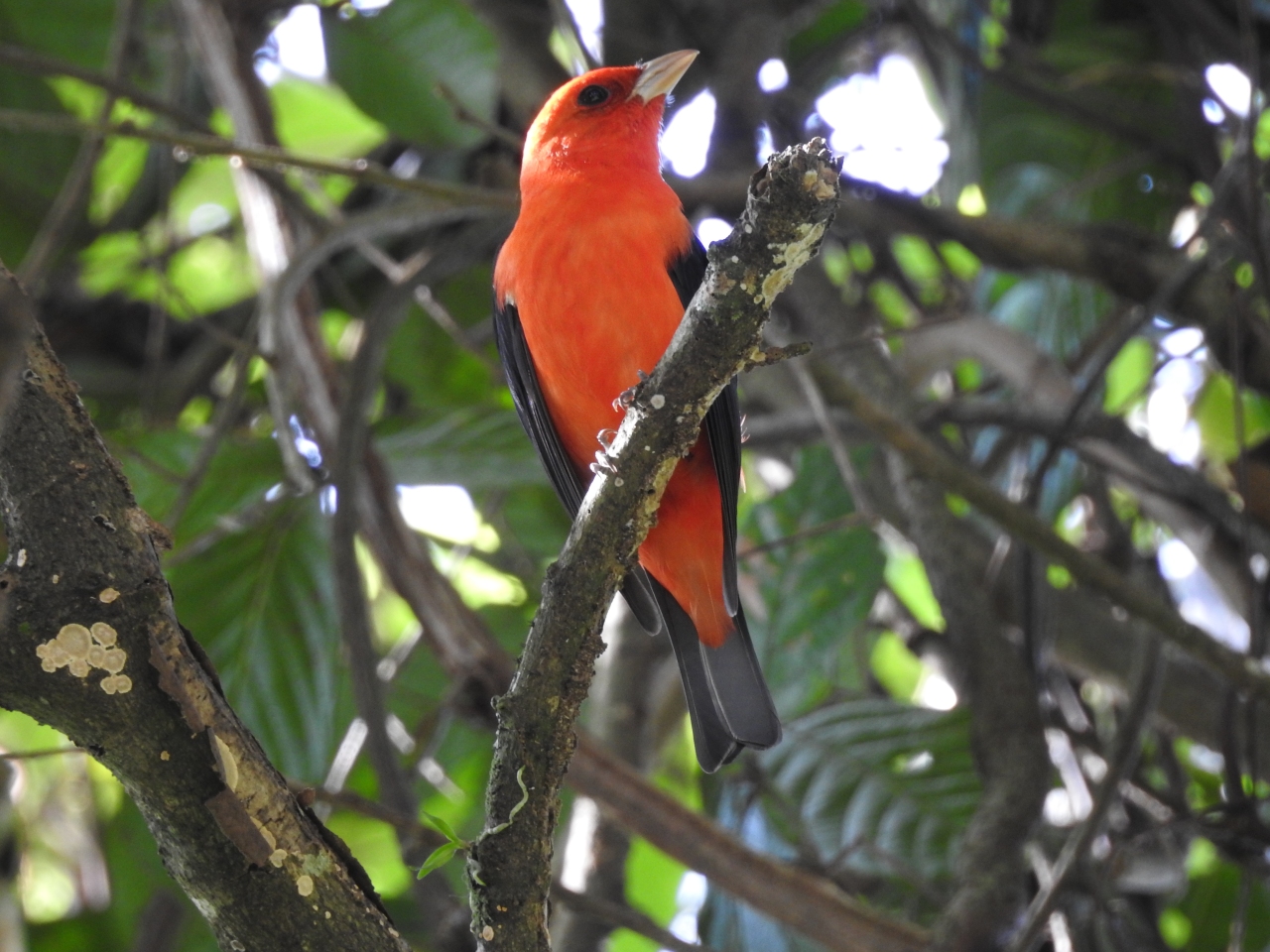 Bright-red birds really catch the eye. When, many years ago, I moved from England (no red birds there!) to Dallas, Texas, I remember shouting to my new father-in-law: “Hey, there’s a red bird in your garden!” Most people living in the southern United States know very well that it had to be the much-loved Northern Cardinal (Cardinalis cardinalis). Although that species is now regularly seen as far south as Belize, northern Guatemala and the southern Pacific coast of Mexico, a bright-red bird here in Costa Rica will not be a cardinal.

Here are the three mostly red birds (all tanagers) that are most likely to be seen in our Turrialba area:

Two of the three are tanagers migrating from the north that are found here between September and April/May. By far the more common of these two is the Summer Tanager (Piranga rubra) because it spends the northern winter months here. Only the male is red:

Here is a beautiful photo of an immature male seen at Santa Rosa in March 2017:

By the time the young male Summer Tanagers get back to North America they have generally acquired their full all-red plumage; photo by John Beer

Summer Tanagers look just as stunning back up there in Minnesota, as this final photo of this species shows:

Look at me! Male Summer Tanager on home territory in northern Minnesota; photo by Larry Waddell

I have no personal sightings of the resident middle-elevation Hepatic Tanager (Piranga flava). I am a little sceptical of the very few reported observations made in our area during migration period since they are not documented by photographs; the two species are very similar. One late July sighting seems more credible, although there is no accompanying photograph and no report of whether it was a male (all red) or a female (yellow).

Bright-red bird number two is distinguished from the Summer Tanager by its much darker wings, black in the adult male. The migrant Scarlet Tanager (Piranga olivacea) has now arrived both in the Turrialba area as well as in other parts of the country. It is a passage migrant and almost all birds will have flown further south by the end of November. They return on their way back north in late March. The breeding male is a stunning sight with his black wings contrasting against the otherwise red body:

Females or non-breeding males are naturally more numerous, and this gives a clue to why the Latin epithet for this species is olivacea.

No red on this immature male Scarlet Tanager; photo taken at Santa Rosa by John Beer

Unlike the two species dealt with above, the third bright-red species you are most likely to encounter, the Flame-colored Tanager (Piranga bidentata) is a resident found in the highlands above 1200 m. The Turrialba Volcano road is a good place to locate it. You won’t confuse it with the other two because it has wing bars and streaking on the back. It often seems more orange than red:

There are of course other Costa Rican species with varying degrees of red. The visitor consulting his field guide (Garrigues & Dean p. 353) will wonder first of all about the White-winged Tanager (Piranga leucoptera). The male looks like a male Scarlet Tanager but with striking white wing-bars. It is undoubtedly present at times in our area but I have only one local sighting, and that was at Rio Colima near Bonilla Arriba, which is almost in the province of Limón. Unsupported sightings of this middle-elevation bird at CATIE should be ignored in my opinion. For the mostly black but strikingly handsome Crimson-collared Tanager (Ramphocelus sanguinolentus) (Garrigues & Dean p. 317) please consult some of my other entries.