The variety of species that John and Milena find close to home down in Santa Rosa de Turrialba is really quite amazing. Often, however, there are identification problems, particularly with flycatchers. Such was again the case this week when John took the following photos of two small supposed ‘flycatchers’ in his garden: 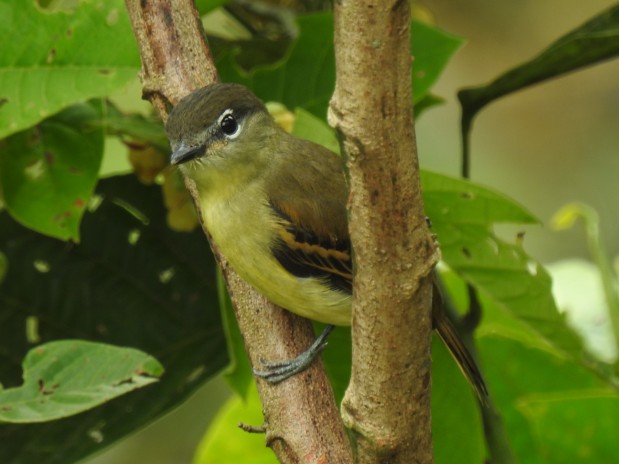 Striking field marks should make this one easy, right?

The drab plumage of this flycatcher is one of the best aids in identifying it.

Photo no. 1 first: On the face of it the first bird above looks as if it should be easy to identify: big but broken eye-ring, strong, buff-coloured wing-bars and yellowish below. However, when we consulted the field guide we couldn’t immediately find a match and so we believe that visiting birders would be similarly stumped.

Of course, if the female is accompanied by the male, matters are greatly simplified: 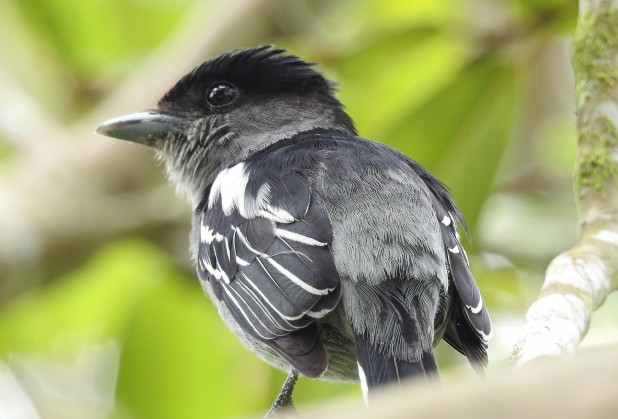 It’s clear that this is a male White-winged Becard; photo by John Beer

Becards were once classified as flycatchers but are now grouped with tityras and ‘allies’, such as the Speckled Mourner and the Northern Schiffornis. Both of these are either rare or uncommon in our area and no doubt would also present id problems (see p. 254 in Garrigues & Dean). I think we passed over the female White-winged Becard (Pachyramphus polychopterus), an uncommon species for us, because of the boldness of the eye-ring on this particular individual. (See page 255 in Garrigues & Dean’s excellent field guide, The Birds of Costa Rica). And, as you can see, the eye-ring is not always so prominent, by any means, and the wing bars often look yellow:

Female White-winged Becard at a nest site at El Banco, between El Carmen and Verbena Sur; photo by John Beer

Photo No. 2: As mentioned in the photo caption,  the lack of distinctive field marks actually helps in this case. A good view of the belly, whose colour is the chief distinguishing characteristic of this Ochre-bellied Flycatcher (Mionectes oleagineus), is not always to be had. Nonetheless, and despite the huge number of flycatcher species in Costa Rica, it is hard to find any so drab as this fairly common bird, which is found mostly in lowland areas throughout the country, though sometimes up to an elevation of 1400 m. The next photo gives a good look at the ochre-coloured underparts.

In the hand: a still slightly stunned Ochre-bellied Flycatcher; photo by Ches Pickering

My house is at almost 1300 m but I have so far only once seen the Ochre-bellied Flycatcher here in San Antonio. The bird in the photograph above recovered after a brush with our window back in January 2016.