Repeated sightings of Hook-billed Kites (Chondrohierax uncinatus) were made by John and Milena Beer and Larry Waddell in the Aquiares coffee fields between October 2015 and February 2016 (see Featured Image above). The area seems to offer little habitat for this species but a pair is now back at the same location accompanied by a juvenile. My only previous sighting of this species in the Turrialba area was of a single bird in March of this year not far from Jicotea heading east towards the Cabécar indigenous communities.

Male and female have different plumage, especially on the underparts:

Male Hook-billed Kite; note the orange bare spot on the lores, separated from the greenish cere; photo by John Beer 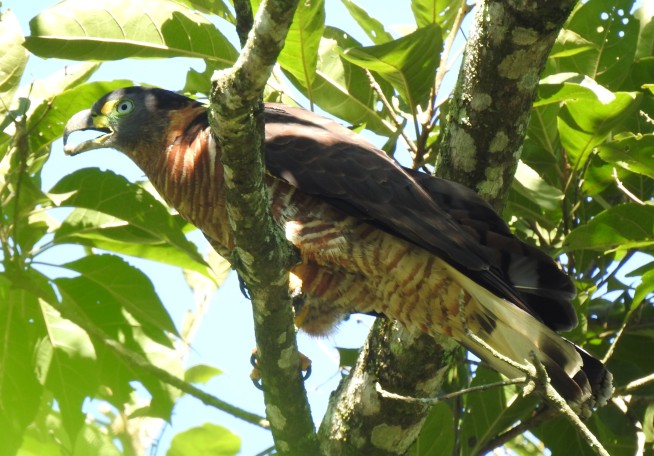 The species is considered rare;  it usually prefers lowland areas near water up to about 1000 m in elevation. An even rarer black morph exists but I have never seen it. On the most recent visit the pair was accompanied by a juvenile with characteristic white collar and underparts.

It struck a posture which we assumed to indicate that it was still begging for food from the adults, though we did not see this happen. We missed the female on this occasion but later in the morning the now unaccompanied juvenile reappeared much higher up near the Aquiares Mirador. This is at about 1400 m, well above the expected elevation range.

We surmise that the young bird may be the result of nesting at this location much earlier this year.

3 thoughts on “Hook-billed Kites back at Aquiares”