I rarely have the chance to spend much time at La Georgina, the highest elevation restaurant in Costa Rica at 3100 m. It’s a roadside stop on the way south between Cartago and San Isidro (aka Pérez Zeledón). And so it was this time too, as John, Larry and I headed south for Finca La Estrella. 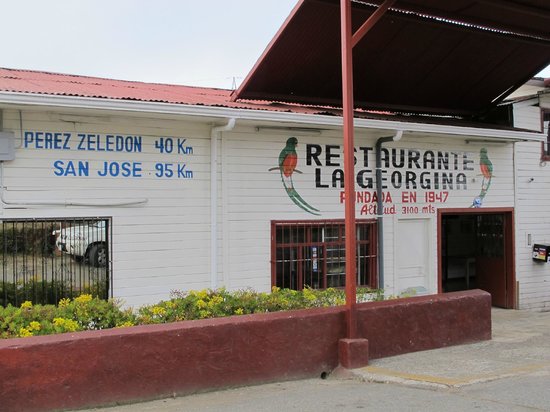 The hummingbirds there are right in your face at the windows as you chow down on your hearty cafeteria-style food. La Georgia is under a new owner and, as ever, you are received with smiles and good wishes. We had just four species in the brief time we were there but we really appreciated the close-up views of these brilliantly-coloured little beauties.

A species that’s very vocal with its insistent chirping is the Lesser Violetear (Colibri thalassinus), formerly called Green Violetear. It’s often hard to spot as it calls from a thin, bare perch among the trees:

With a view like this there’s no mistaking the ear patch of the Lesser Violetear; photo by Larry Waddell

Perhaps the commonest mountain hummingbird at Cerro de la Muerte, and in our area too, is the Fiery-billed Hummingbird (Panterpe insignis), whose throat colours are not always easy to see. On many occasions it seems to be just an all-dark hummer, but Larry’s photo reveals its beauty:

No fiery throat this time but sparkling blue on the rump and side of the chest; photo by Larry Waddell

Our third species was the Talamanca Hummingbird (Eugenes fulgens), formerly termed, and with good reason, the Magnificent Hummingbird:

The angle at which the shot is taken prevents full appreciation of the long, black bill of this species. The size of the bird (5 inch) and the extravagant length of the bill are what makes it distinguishable from the Fiery-throated Hummingbird, even in poor light.

All three of these beautiful birds can also be found at the Turrialba Volcano. but if you’re headed south through the mountains from Cartago, hungry or not, be sure to stop off at La Georgina.