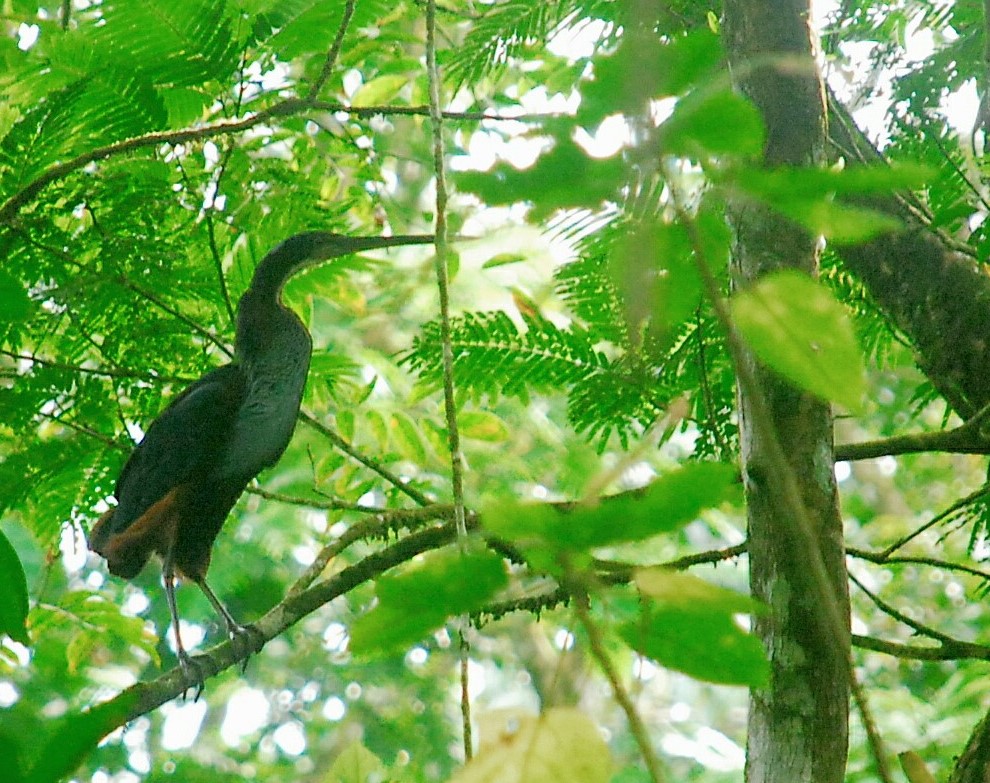 With help from owner Eric Berlin and guides Jairo Jiménez and Steven Aguilar I was able to visit the Reserva Las Brisas near La Alegría in Limón province for just the second time. The last outing had been extremely memorable and is covered in a previous post, but the visit this time completely exceeded all expectations. It wasn’t until the day’s listings were fully completed that I realised that not only had Steven tallied three new life birds (Agami Heron, Rufescent Tiger-Heron and Rufous-winged Tanager), but so had I, although different ones: Band-tailed Barbthroat, Blue-chested Hummingbird and Bay-breasted Warbler. 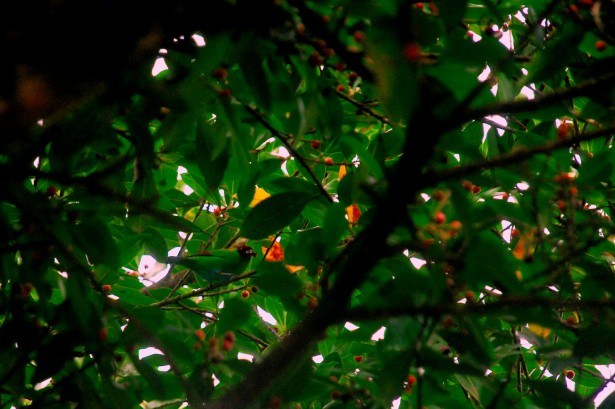 Male Rufous-winged Tanager at Las Brisas, courtesy of Steven Aguilar. Careful! This species can be easily confused with the much more common Bay-headed Tanager.

The Agami Heron (Agamia agami) was probably the bird of the day, because of its scarcity. I had already managed to see it before, just once, at Sierpe in the southern Pacific area. Steven’s other two lifers I had also seen only once before, the tiger-heron at Tortuguero and the tanager on the previous occasion at Las Brisas. Prize for prettiest sighting goes to the male Shining Honeycreeper (Cyanerpes lucidus) with its blue body and bright yellow legs. Four of these beauties (two were green, streaked females) fed ravenously on berries within just a few feet of us at the entrance to the main reserve. Here’s a nice shot of one of the males savouring a berry:

Green Honeycreeper (Chlorophanes spiza), Scarlet-thighed Dacnis (Dacnis venusta) and Blue Dacnis (Dacnis cayana), together with large numbers of Red-eyed Vireo (Vireo , joined in the feast. Of these only the Blue Dacnis is a bird that I rarely see, since it is an uncommon lowland species that rarely ventures above 900 m. 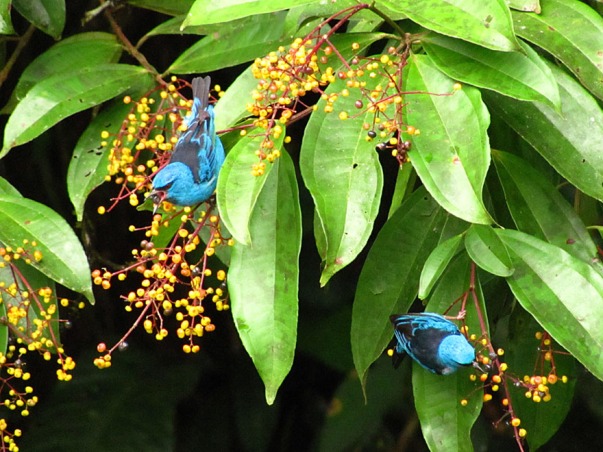 What was different about this visit, other than the astonishing numbers of migrant Red-eyed Vireo and Swainson’s Thrush, …..

Here’s a Red-eyed Vireo in Minnesota shortly before undertaking the long flight down to Costa Rica and parts unknown; photo courtesy of Larry Waddell

…..was that we had Eric’s permission to visit the lower reserve, which is situated below the town of La Alegría at an elevation of only 250 m and with a quite different bird population. This was the location where we found the herons, although the upper reserve also has some aquatic species such as Least Grebe (Tachybaptus dominicus).

This was only my second look ever at a Rufescent Tiger-Heron (Tigrisoma lineatum) and my first view of a juvenile. Garrigues and Dean’s field guide considers the juvenile of this species and that of the Fasciated Tiger-Heron (Tigrisoma fasciatum) to be ‘virtually indistinguishable’. However, I am very familiar with the juvenile fasciatum and I don’t think I would have confused this particular juvenile lineatum, and not just because of the habitat. This lowland species of quiet waters has much darker barring, it seems to me. 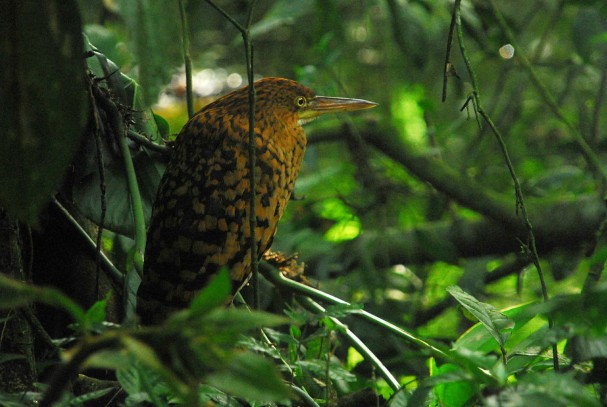 My own three lifers – I missed the Bicolored Antbird (Gymnopithys leucaspis), unfortunately – are species that I have perhaps seen before but not been able to identify correctly. In the case of the Bay-breasted Warbler (Setophaga castanea), a large and relatively slow-moving migrant species, I have doubtless seen it before since it is quite common (less so at our higher elevations). It seems that a large wave of this species has recently arrived, and just a few days after this visit to Las Brisas I found it in large numbers at CATIE in Turrialba (see discussion in my next post). Of the two hummingbirds, a female Blue-chested Hummingbird (Amazilia amabilis) was banded and photographed at CATIE in May 2011, but I was absent from the banding programme that day! Today’s bird at Las Brisas was also a female. This is a lowland Caribbean species almost identical to the Charming Hummingbird (previously Beryl-crowned Hummingbird) (Amazilia decora) of the southern Pacific region of Costa Rica. 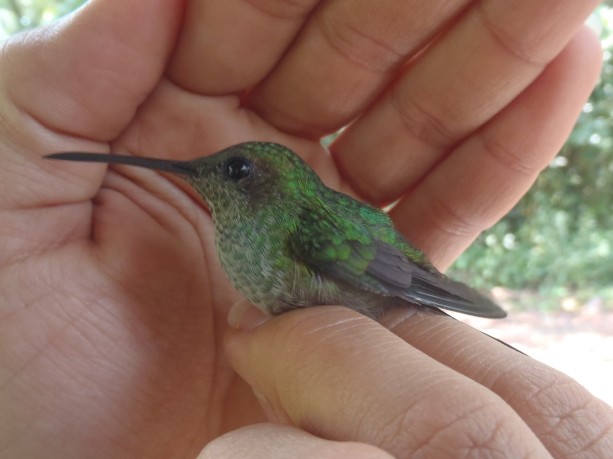 Finally, the Band-tailed Barbthroat (Threnetes ruckeri) is one that I have previously only glimpsed on a couple of occasions, and not to my complete satisfaction. 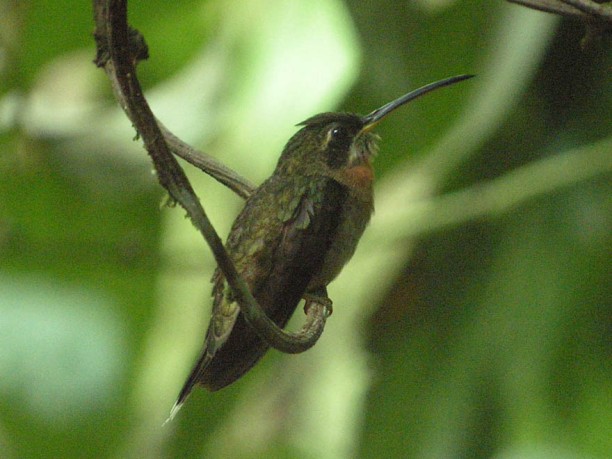 This species is superficially similar to the much less common Bronzy Hermit (Glaucis aeneus) and, perhaps, to the very common Stripe-throated Hermit (Phaethornis striigularis), which was also present at Las Brisas.

For the full list of many more than 100 different species observed, see:

For the upper reserve, above La Alegría: http: //ebird.org/ebird/view/checklist/S39967890

And for the reserve below La Alegría: http://ebird.org/ebird/view/checklist/S39967889