A short walk in Turrialba that is to be recommended for all nature lovers connects the high pastures at La Pastora with the Aquiares coffee-fields below. 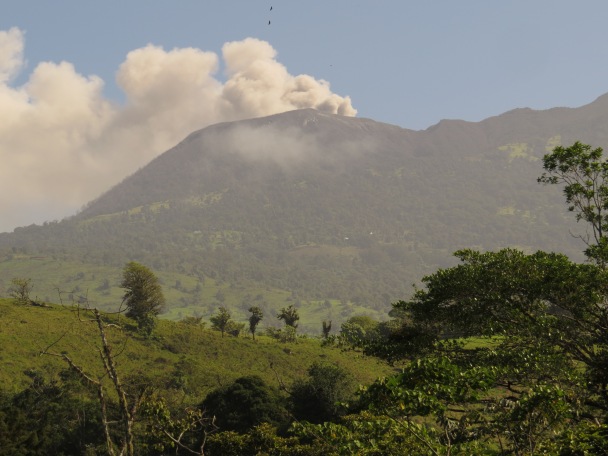 The Turrialba Volcano rises above this location

It’s much easier to start at La Pastora and go downhill, but John Beer and son Sean took me by 4-wheel drive to the Aquiares Mirador, the starting point for a short path through thick woodland at first.

Looking back to heavy forest

The walk is a beautiful one and surely will provide some nice surprises in terms of bird species. On this occasion, we were much barked at by a disturbed female coyote but the morning’s bird list contained only relatively common species. John’s best shot this time was of a Sulphur-bellied Flycatcher (Myiodynastes luteiventris).

The thick malar stripe that distinguishes this species from the Pacific-slope look-alike, the Streaked Flycatcher (Myiodynastes maculatus) can be clearly seen here.

The Sulphur-bellied Flycatcher is present in Costa Rica from late February to mid-October, with most birds simply passing through as migrants. This means that if you are in the country outside these dates you will be looking at a Streaked Flycatcher, and probably only on the Pacific side.

When you break out of the forest after perhaps only a 20-minute walk, you enjoy sweeping views across to the Turrialba Volcano (see John’s photo above) and the cliff where the Rio Turrialba drops as a ribbon waterfall (two actually) down to the La Pastora-Pacayas road.

Only recently has the cliff face next to the Rio Turrialba given way. It is still mostly denuded of vegetation.

From the open pastures below, the aforementioned coyote barked for almost a full hour. Sean managed to get several very nice photos even though she backed away from us at every approach: 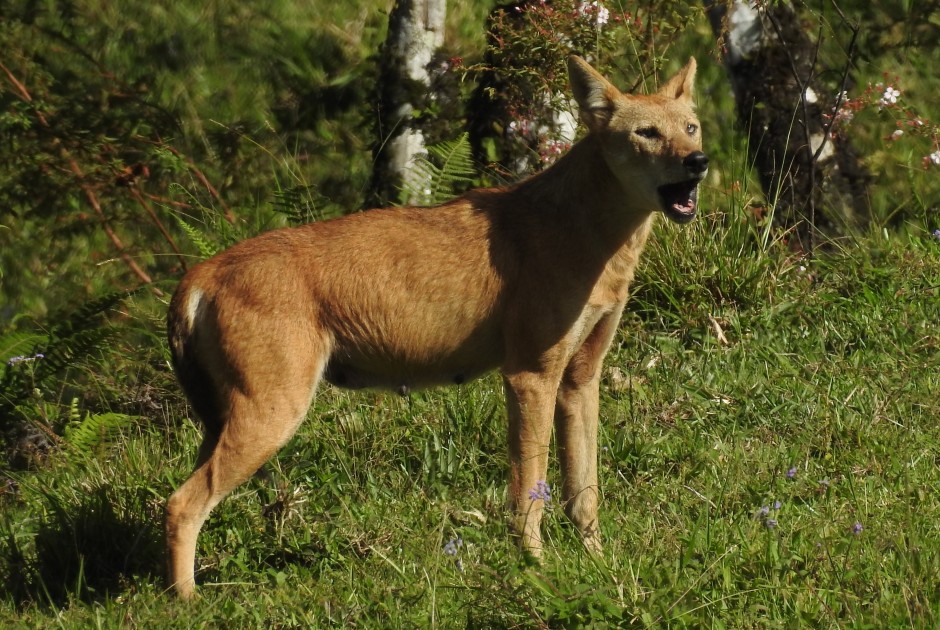 We had earlier glimpsed at least one cub that this female was defending.

Some have already suggested that this may be a hybrid animal, since it is certainly not typical of most coyotes seen in our area. However, its behavior was not at all like that of a dog and there was no nearby human habitation.

Instead of continuing to La Pastora through open country we returned to Aquiares by the same path, enjoying some more birding in the thick forest environment. The morning’s surprisingly brief species list can be found at: