siteNesting in Costa Rica actually continues almost throughout the year but June/July is still pretty much high season. On their trips to the Aquiares Mirador, John and Milena Beer found the nests of two fairly common but daintily pretty species. Milena’s sharp eyes seem to always find things that John and I would certainly otherwise miss. 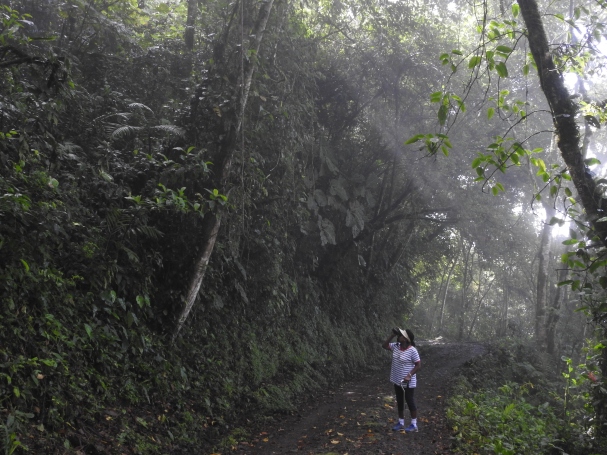 Milena peers into the gloom. It’s a very beautiful environment but how can she see anything?

Both nests were pretty much right on the path but the first discovery was the nest of the Plain Xenops (Xenops minutus), a small member of the Furnaridae (ovenbirds and woodcreepers) family. Many of these are notoriously difficult to identify but the two species of Xenops found in Costa Rica have different habits to most of the group since they don’t creep up tree trunks but instead forage rather acrobatically, sometimes upside down, in dead foliage and vines. The Plain Xenops is much more frequently encountered than the rather rare Streaked Xenops (Xenops rutilans) of middle elevations.

John showed me the nest site on my first visit.

But I missed the feeding! Fortunately I was able to get a good look at one of the parents in the same area.

I can’t resist adding John’s picture of a Plain Xenops that had a brush with his window in Santa Rosa, close by Aquiares. The feathers show up in amazing detail and prove what I have said before, that the Plain Xenops is not so plain at all. 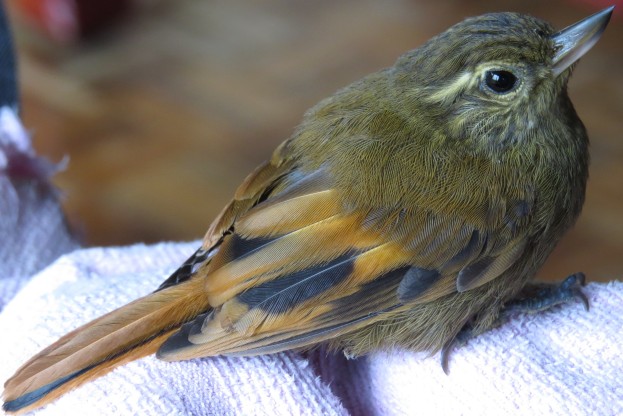 Note the upturned bill on the Plain Xenops

The second nest that Milena found on the path was located right on the bank. It belongs to the Slaty-capped Flycatcher (Leptopogon superciliaris) The only description of a Costa Rican nest of this species described in Stiles & Skutch (A Guide to the Birds of Costa Rica) came from the month of March. The picture below of the nest site at Aquiares is similar to as described in Stiles & Skutch but the date is not:

Despite the paucity of information in Stiles & Skutch (1988) on nesting, the Slaty-capped Flycatcher is a fairly common bird of middle elevations on both slopes in Costa Rica. The dull yellow underparts are not distinctive but the ear patch, shown clearly in John’s next photo, certainly is:

Owner of the nest, the Slaty-capped Flycatcher