The walking path at Casa Turire is a real delight first thing in the morning. The mix of woodland birds and aquatic species helps maintain interest for several hours and in addition you never know quite what you’re going to get. We were hoping for a glimpse of the Limpkin (Aramus guarauna) and thought ourselves fortunate when one flushed right in front of us.

The Limpkin spreads his wings

One turned into two, and then three, and then four! Definitely a high number here near Turrialba. The Limpkin is a common bird only in Palo Verde National Park and Caño Negro. In our area, the Angostura Dam is the only place I know to look for it. World-wide it is the only member of its family and is thus a bit of a curiosity. It gets its name from its limp-along gait and might at first be mistaken for a heron or a large bittern. 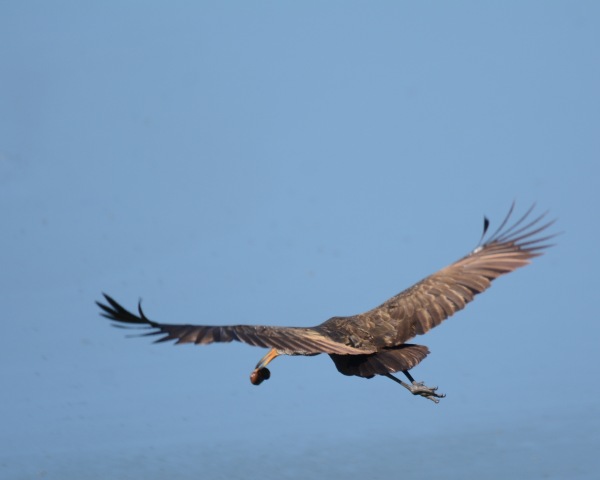 Limpkin makes off with a snail

Larry finally got a head shot of one of the four, which briefly posed all next to each other amidst the marsh, which here is mostly composed of water hyacinth.

The Limpkin is not the only species addicted to snails. So too is the very appropriately named Snail Kite (Rostrhamus sociabilis), a species that can be seen quite readily at the Angostura Dam but nowhere else in the country besides Caño Negro and the Rio Tempisque basin.

Adult Snail Kite looking for yet another apple snail

See my next post for a full species account of this morning visit to Casa Turire on the banks of the Angostura Dam.

One thought on “A surfeit of Limpkins at Casa Turire”