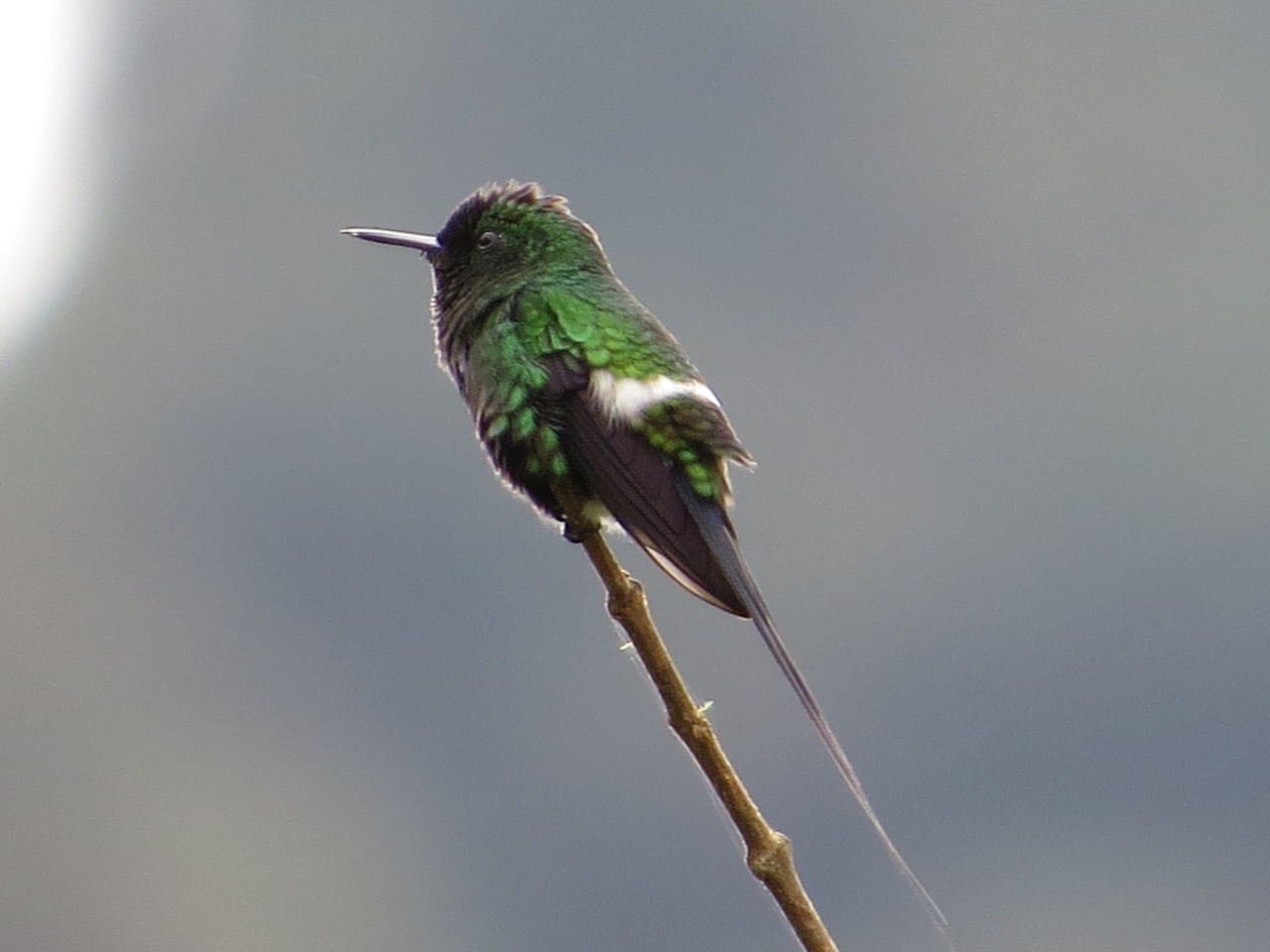 A dirt road from La Suiza at around 600 m leads uphill several kilometers to a height of 1300 m and more, affording spectacular views of the surrounding countryside and the Turrialba Volcano. It passes through the tiny community of Santa Cristina and then follows a wooded ridge that has excellent habitat for birding. This is yet another of the wonderful side roads that friend John Beer has been able to show me. Even if you were to see no birds at all, it would make a great picnicking excursion.

As it is, it looks as though it practically guarantees two species that are not always easy to find in our area, the tiny Green Thorntail (Discosura conversii) hummingbird and the beautiful and aptly named Elegant Euphonia (Euphonia elegantissima). When we could go no further by car, the first bird to greet us was a female Green Thorntail. Later two males appeared and yielded good opportunities for photos.

The combination of white rump band and long tail on the male precludes any other hummingbird species and in good light, the blue chest is also evident:

Many other hummingbirds zipped by but rarely stayed put to allow identification.

The trail dips through a stream bed and then continues uphill through only partially wooded land, but our turn-around point allowed good views of a single male Elegant Euphonia, making brief chirping sounds rather than its more usual twittering:

Male Elegant Euphonia, a real beauty. Plumage below is lighter than in some bird guides

The female of the species is almost as handsome, but unfortunately we had no sightings of individuals other than this lone male.

We spent a long time identifying a pair of Contopus flycatchers, one of which seemed almost to follow us along the final part of the walk:

The combination of bill colour (orange lower mandible) and the persistent pee-wee call means that we’re pretty sure it’s the Eastern, not the Western, Wood-Pewee. Both of these are migrants in Costa Rica. They are slightly larger than the resident Tropical Pewee (Contopus cinereus), which in good light shows substantial traces of yellow on the underparts.

A female Common Pauraque flew up and alighted close by in a spot where John found a nest earlier in the year. He couldn’t get a photo this time, unfortunately.

Tanagers were equally difficult to pin down. A mixed flock finally appeared and John was able to catch this Spangle-cheeked Tanager, which is actually a highland species not much found below 1400 m:

We’re told that the trail continues into an even more heavily forested zone higher up before finally petering out at the last farm, which means that we can look forward to further exploration of this beautiful area. Here’s the morning’s list:

One thought on “Excursion to Santa Cristina, La Suiza”