How many more good birding locations remain to be discovered in the near vicinity of San Antonio? Friend and neighbour Edwin offered to show me a nearby place that he recommended for both its beauty and its bird life. As the main man in charge of maintenance of the local water supply, Edwin had been working on water lines there.  I must confess that I was fairly sure that it would be a spot that I was already familiar with. Not so.

Located less than 200 m off the rough track that leads from Santa Eduviges up to Guayabo Arriba is the dairy farm of Jorge Guillén and family. There we found them, husband, wife, grown sons and daughters, all hard at work milking their cows, by hand, in a large, covered lechería.  Their  property extends from here down to a small river in a deep and thickly wooded ravine, too steep to be exploited as pasture land.

We had only an hour or so before night and the accompanying fog would arrive, but as we scouted the edge of the ravine a pair of Emerald Toucanets (Aulacorhynchus prasinus) appeared among the thick foliage. Costa Rican birds have a blue throat contrasting against the emerald green body. This stunningly beautiful species is fairly common in many areas just a little higher than San Antonio but there have been relatively few reports so far this year. The excellent file photo above is courtesy of Karel Straatman from one of his visits to our region.

We identified only 13 species during the brief visit but these included the Prong-billed Barbet (Semnornis frantzii), a species that I have had considerable difficulty finding locally and that is endemic to Costa Rica and western Panama. Barbets have thick bills and are related to the toucans but are not found north of Costa Rica, where we have just two species. The other is the usually silent Red-headed Barbet, quite a contrast with the noisy Prong-billed whose cocora call can be heard at a considerable distance. Here’s a nice shot, courtesy of Richard Garrigues, co-author of The Birds of Costa Rica: 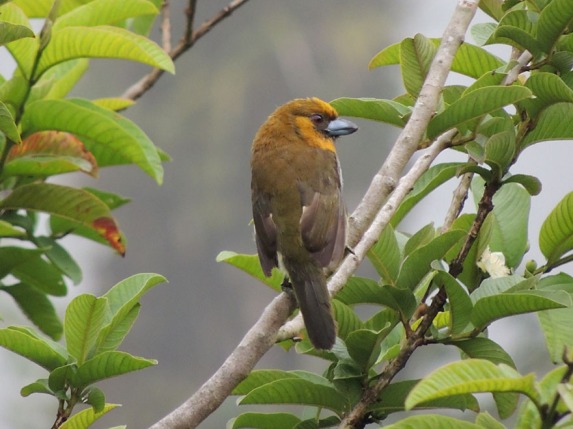 We identified just 13 species in the brief visit, but it includes two hummingbird species that are hardly ever in my garden (Purple-throated Mountain-gem and Green Hermit). Here’s the list:

One thought on “Emerald Toucanet and Prong-billed Barbet”