The Greenish Elaenia (Myiopagis viridicata), a small flycatcher, is an interesting bird that Steven and Magda Easley identified for me on the entrance road to the Rancho Naturalista recently. It was probably my first ever sighting of this species, though I once fancied I spotted one in nearby San Rafael. Its distribution is restricted mostly to the Pacific but there is an isolated population here in our area in the watershed of the Río Reventazón, where it is considered rare. My view was a little obscured by the heavy vegetation but I’ll know to be on the look-out in future and to try to distinguish from other small flycatchers. My best thanks to Bernardo and Hansell of Biofotos http://www.biofotos.org/biofotos/Default.aspx?Cat=1 for the use of the fine photograph below, which was taken in Guanacaste, a very different part of the country. 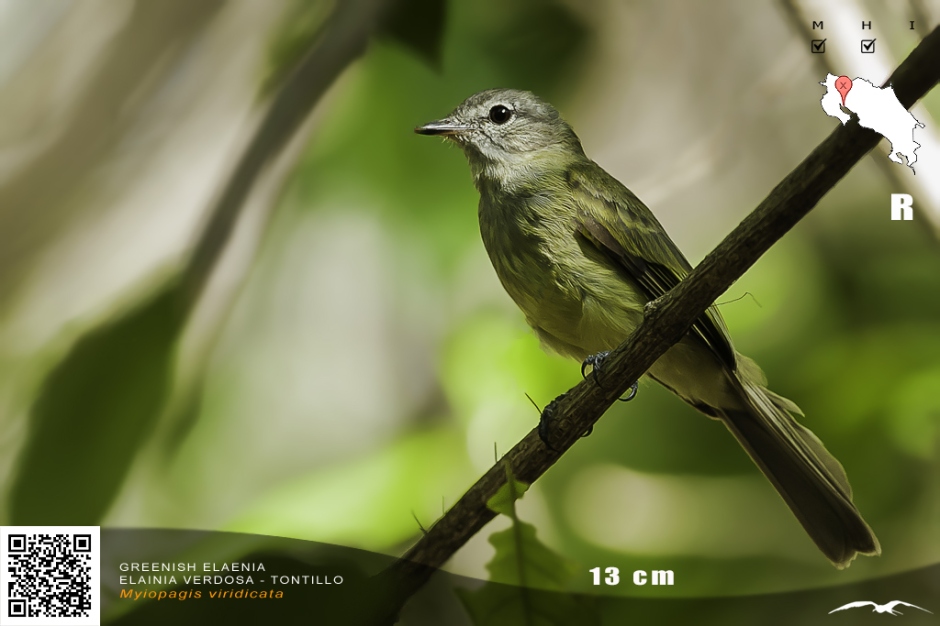 Flycatchers can be difficult, that’s for sure. This one seems rather dull-plumaged and lacks the conspicuously bright wing edgings of the superficially similar Yellow-olive and Yellow-margined Flycatchers (pp. 232-233 Garrigues & Dean). It doesn’t look at all like the other elaenias (pp. 230-231 Garrigues & Dean). It does seem a strange coincidence, however, that the Lesser Elaenia (Elaenia chiriquensis), a slightly smaller version of the very common Yellow-bellied Elaenia (Elaenia flavogaster),  is also a mostly Pacific species with a similarly isolated population in our area, this time a little further west near Cartago and Paraiso.

I’m not at all sure that, without help, I would have made a certain identification of the Greenish Elaenia, given its lack of salient field marks. While most of the other similar small flycatchers show some fairly recognisable feature, the best clue to this little guy is perhaps that, apart from the pale yellow underparts, it is just, well, greenish.