Total solitude at the waterfall below San Diego today. A beautiful, serene spot on a rock ledge above the river and waterfall. I spent a full 15 minutes doing absolutely nothing after picking my way down the steep path from don Jorge’s cabin. He has repaired the path after the recent rains and it’s now much easier to navigate, with plenty of places to stop and listen for forest bird species. I probably spent a full hour and a half there, even though it’s a short trail.

Beautiful spot and birds nearby – the San Diego waterfall

There were no Dippers on the river this time but I have three goodies to report: Dusky-faced Tanager (Mitrospingus cassinii), Buff-throated Foliage-gleaner (Automolus ochrolaemus) and Orange-billed Sparrow (Arremon aurantiirostris). All three are new for San Diego and the Foliage-gleaner is a life bird for me. Actually, I have had suspected views of it before, but this time I was treated to a good long look and was able to confirm the identification very easily. Really, nothing else has the rufous tail and the eye-ring with spectacles. It’s a forest species that is actually fairly common, but much patience is required in that leafy environment. The foliage-gleaners, along with the leaftossers (I just love those names), are to be found with the ovenbirds and woodcreepers. Five species receive the foliage-gleaner moniker and only one of them (Ruddy Foliage-gleaner) is not to be expected in our area. You’ll find them on pages 208-211 in the Garrigues and Dean guide. 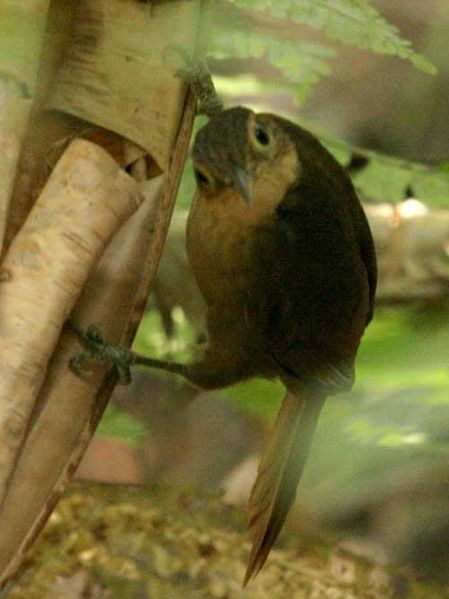 The Buff-throated Foliage-gleaner: a tricky bird to photograph! By Kent Nickell from Waterloo, IA [CC BY 2.0], via Wikimedia Commons

The walk from San Antonio in hot sun was rather disappointing. No warblers, indeed no migrants of any kind, were to be found, though Yellow-crowned Euphonias now seem to pop up everywhere.  The rabo de gato (porterweed) hedges are almost devoid of hummingbirds. The woodland patch behind Chalo’s brother’s little cabin also had little to offer this time so I decided to try the hike down to the waterfall.

The Ruddy Foliage-gleaner was my first find as I entered the forested section, which is preceded by an area planted with bananas and a pond with tilapia. The pond never seems to attract bird species but the beautiful blue morpho butterfly abounds.

The Orange-billed Sparrow is a real beauty and is rated a common bird, but its undergrowth habitat makes it sometimes hard to find. I have not seen it at this locality before. The forest was full of bird sounds and I must have missed several species whose songs and calls I could not identify.

One of the noisiest was the Dusky-faced Tanager. The little group moved around very noisily but it took me quite a while to get a good look. The eye in the black face is a prominent mark, as is the brownish crown. The bill looks more like that of an oriole, fairly long and pointed, than of a tanager. I have seen this bird before at the nearby Guayabo National Monument, but ebird says it is rare for this area and I await verification from them before they will add it to my Life List. The guide books indicate that it should not be found above 600 m and the waterfall here at San Diego cannot be lower than 950 m, hence the doubts. I have no doubt about my identification of this species, however.

Here’s an English twitcher (me, of course) at the waterfall on an earlier occasion:

Here is today’s list, which includes my garden and the walk from San Antonio to San Diego and back: