Both the Olive Sparrow (Arremonops rufivirgatus) and the Gray Hawk (Buteo plagiatus) are quite common throughout their range, but neither one is to be found in the Turrialba area. It was, then, with great glee that I found both of them on a recent (non-birding) visit to Sabana Larga, just outside Atenas, in the western Central Valley.

On the way from San Jose to Atenas, I saw a perched Gray Hawk near the Rio Grande at La Garita and a pair, seemingly in courtship display, was right over Sabana Larga for several minutes the next morning. This species has recently had the Gray-lined Hawk (Buteo nitidus) of the southern Pacific lowlands split from it. I may even have seen the latter species when I was down at La Gamba, in the southern Pacific region, last year. A medium-sized hawk in our area near Turrialba is almost always a Roadside Hawk (Rupornis magnirostris). Here’s a beautiful photo of a Gray Hawk in Costa Rica from Richard Garrigues’ collection: 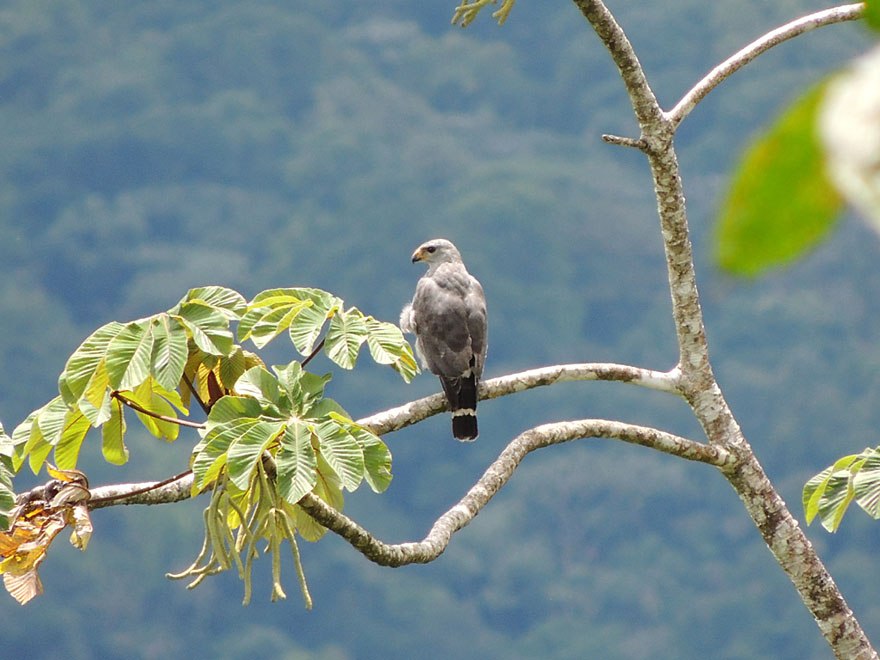 Rear view of a Gray Hawk sitting in a guarumo tree

The Olive Sparrow is not nearly so stunning. It is, however, a pretty enough little bird, clean-cut and pale below and with a striped head similar, as the Garrigues and Dean field guide says, to that of a Worm-eating warbler (for North American birders). It was a life bird for me, since I have very rarely birded in the northern Pacific area. I found it in low scrub at Sabana Larga and saw immediately that it was much lighter than our Black-striped sparrow (Arremonops conirostris) (not usually found in the Central Valley) and did not have the strikingly black-and-white head of the also common but much larger Stripe-headed Sparrow (Peucaea ruficauda). The latter was even present in the same bush as the rufivirgatus.