Turrialba is now recovering from the disastrous floods that closed entries to the town and I took advantage of the easier travel conditions to take a trip to the flat land near the Angostura Dam. I did not, on this occasion, visit the shores of the dam, where such species as the Snail Kite are regularly found, but instead I took the dirt road to Hotel Villa Florencia http://www.villaflorencia.com/. This road skirts the area that belongs to CATIE, the agronomic research institute, where the new  Turrialba hospital is to be built. Go to the end of the post for day’s list.

It passes through fields in part rotated for sugar cane, and the first one had attracted a large flock of migrating Barn Swallows, mixed with, presumably locally resident, Northern Rough-winged Swallows. This is the earliest date on which I have observed migrants in our area, though I must admit to not having paid much attention to swallow flocks in past years. When I see swallows here in San Antonio they are almost always the resident Blue-and-white, which seems to prefer slightly higher elevations. Migration never seems to get under way here until the beginning of October, with very few sightings in September.

These same fields hold large numbers of small seed-eaters. These seem to be mostly Variable Seedeaters, which recently also seem more common in San Antonio, but also Blue-black Grassquits. I have not recorded this species here in the higher country, though it ought to appear from time to time. I was pleased, then, to see several males, doing their typical little jump-and-flutter above their perch, plus at least one streaked female.

You have to note the absence of white in the wing of the male to be sure of the identification, since the glossy blue-black plumage is often obscured by poor light. A good view of the female clinches the identification, I find.  The common seed-eating species here on the volcano slope is the Yellow-faced Grassquit, but I found none of these today near Villa Florencia. For comparison purposes, here’s a nice shot of the very different, female Variable Seedeater, with its stubbier, thicker bill, from the files of Karel Straatman. 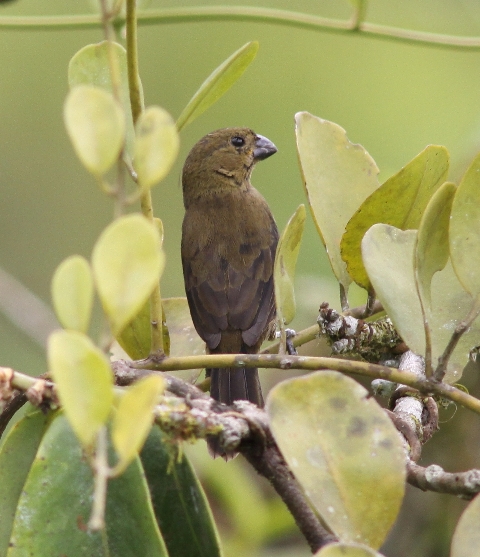 Female Variable Seedeater, identical on both Caribbean and Pacific slopes

The male Thick-billed Seed-Finch can always complicate identification matters. For that reason, I mostly look for the warm-brown plumage of the female before being sure of the presence of that species. I could find none at Villa Florencia, but I did spot at least one male White-collared Seedeater. This species, though it prefers the lowlands, was once common in the San Antonio area also, I am told. However, it is extensively trapped for cages because of its pretty whistles, and I have not seen one locally in all these eight years.

The road through the fields was enlivened by the presence of at least 20 Black Vultures feeding on just one small armadillo carcass. The birds were quite unperturbed by the passing of occasional cars, and when I drove past they barely moved at all. Just beyond, two Southern Lapwing stood tall in the road and then flew off to alight in taller grass nearby. This species has arrived only relatively recently (1997) in Costa Rica, taking advantage of the now extensive deforestation. It can reliably be found in the area of the Angostura Dam, for example in the grounds at Casa Turire, another fine local hotel. The photo below, as well as the one above, is by kind courtesy of Richard Garrigues.

Finally, I stopped for a surprisingly affordable breakfast at the Hotel Villa Florencia, whose entrance harbours a large Montezuma Oropendola nesting colony. Owners and staff gave me a very warm welcome and showed me their illustrated booklet of the birds found on their grounds. I am currently helping them make some corrections to the English version of the text. I can heartily recommend the hotel both for its beautiful facilities and locations as well as for the excellent and inexpensive food served at its restaurant, which is open to the public.

Finally, here is the bird list for this all too brief trip: