My wife Ches’s photo is a little fuzzy but that’s the fault of our tiny camera! I generally have to use photos taken by friends and well-wishers but this time she was able to get up close enough to this guy seen above in the güititi tree. The Collared Araçari (Pteroglossus torquatus), locally known as the cusingo, is one of the 6 toucan species found here in Costa Rica. Pedant that I am, I always insist on writing (and pronouncing!) the cedilla ç (yes, Barcelona FC is Barça) of the Brazilian Portuguese name of this bird. At 16 inches it’s a little bit smaller than our common Keel-billed Toucan (Ramphastos sulfuratus), and this week marks only my second sighting of the species in San Antonio, the first in our garden. The Collared Araçari, like its Pacific counterpart the Fiery-billed Araçari (Pteroglossus frantzii), which adorns the cover of the new edition of Garrigues and Dean’s The Birds of Costa Rica, is a lowland species not much seen above 1000 m. I see it fairly frequently down at nearby San Diego (approx. 1000 m) but it’s certainly unusual here in the village of San Antonio. 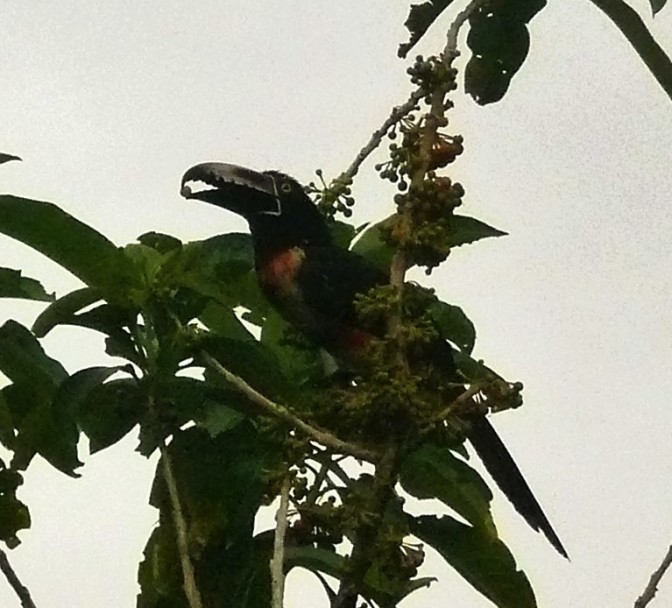 Adding the 12-inch Emerald Toucanet (Aulacorhynchus prasinus), the tucancillo or curré, this means that all 3 local toucan species have come up close recently. Of the remaining toucan species, the big Black-mandibled Toucan (Ramphastos ambiguus) is occasionally found over at Guayabo Monumento Nacional, but I fear that I may never see the smaller Yellow-eared Toucanet (Selenidera spectabilis). Though it’s a Caribbean species found up to 1200 m. it is also quite rare. I live in hope, because it has been seen fairly recently and not far away at Pavones, off the Siquirres road, and also at Rancho Naturalista, Tuis, near La Suiza. See my next post for my most recent excursion to the Tuis River valley.