Another jaunt up the Turrialba Volcano Road was very instructive in terms both of bird species and of the continued fears among the locals, who are faced with an uncertain future because of the recent activity of the huge volcano.

I set off late morning and drove only the first part of the road, from La Pastora past the little restaurant La Montaña del Fuego, up to the first forest patch. I parked and scoured the road here and a little bit further, up as far as El Rincón del Toro, which has an entrance with a small waterfall to the left. The weather remained cloudy but there was barely a trace of rain.

First birds as I stepped out of the car were two Yellow-winged Vireos (Vireo carmioli). This species is endemic to Costa Rica and western Panama. I knew immediately that I was looking at a new (for me) bird but had to consult Garrigues & Dean for verification, because both birds were very active. They were either in courtship display or in dispute and I was unsure at first as to whether they were vireos, warblers, or even flycatchers. The Yellow-winged Vireo is very similar in size and plumage to the Yellow Tyrannulet (Capsiempis flaveola), but the latter species is a lowland bird in its Caribbean range. Fortunately, one of the birds reappeared about 45 minutes later and I was able to confirm the principal features, the spectacles (mentioned in Stiles & Skutch) being particularly prominent. Garrigues & Dean point out that it’s the only vireo  in Costa Rica with yellow wing bars and yellow underparts.

I am most grateful to Paul Bedell and flickr’s Creative Commons for the following photograph of this species, taken in Colombia. If anyone can help with a pic from Costa Rica, please drop me a line! 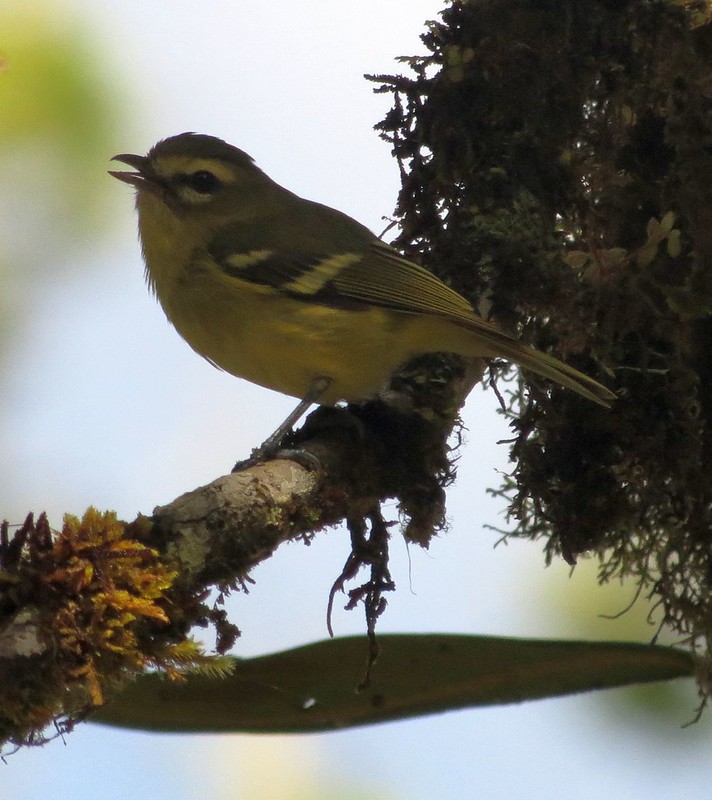 I spent a full two hours of bliss on the roadside, disturbed only by the occasional passing vehicle. I was lucky to find that lots of migrant warblers are still here, but I also had a very friendly male Hairy Woodpecker (Picoides villosus) right up next to me for long periods. In Costa Rica, the Hairy is smaller and darker than the birds found in North America and is a highland species. Here, with the kind permission of Richard Garrigues, is a fine shot of a typical male:

A common highland species in our area, the Hairy Woodpecker

Another very pretty sighting was of the Ruddy-capped Nightingale-thrush (Catharus frantzii), a common highland thrush that looks much like the Orange-billed Nightingale-thrush that is now resident in my garden and with which I have become very familiar. The Ruddy-capped matches its name, but it also has a bi-coloured bill, its legs are rather dark, and it lacks the eye-ring sported by the Orange-billed. A second bird hopped around in the road in front of the car as I tried to make my way down to La Montaña del Fuego. Karel Straatman‘s photo below captures beautifully the essence of this bird , framed in its often gloomy habitat.

At the restaurant, which serves excellent local Tico food at very reasonable prices, I talked to the owner, Maria, and a couple of locals. For the first time, I heard real concern about the situation with the volcano, which has now spewed ash on several occasions for the first time in 150 years. The road up to La Central is open for the moment, but much of the vegetation near La Central is now burnt they say and they are very worried about a new and larger eruption. The volcano is making constant noise that can be heard at La Central, and the authorities have said that in the case of a major eruption they will close the two main access roads at Pacayas and, down near Turrialba, at Santa Rosa. This would actually also leave us caught in the zone at San Antonio. I think I’d better bird the volcano road as much as possible before it’s out of bounds. My next plan is to drive up to La Fuente and turn right, where I have a good chance of finding Resplendent Quetzals, according to local farmers. I’ll need a full day and I’ll have to do it soon, it seems.

Finally, here’s the list of the species I found on the volcano road this day:

One thought on “Turrialba Volcano Road, the latest news and a life bird for me”