One of the advantages of our location here in San Antonio at 1300 m elevation is that we can easily move to either lower or higher altitudes where different bird species can be located. The recent eruption of the Turrialba Volcano had left the only paved road from La Pastora to La Central and the upper parts of the volcano slope blocked for security reasons, but I determined yesterday that the road is now open again, at least as far as La Central. This means presumably that the dirt road linking the Turrialba Volcano with the Irazú Volcano should also be open.

Now we can once again easily see birds such as the Slate-throated Redstart (Myiobortus miniatus), pictured below, courtesy of Karel Straatman. 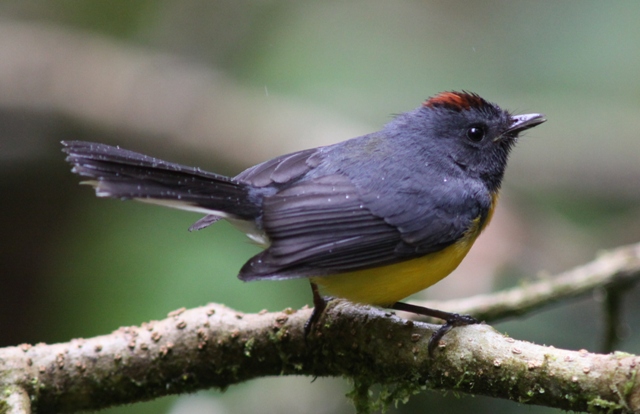 My quick excursion up just the paved section of the road allowed me to see again the tremendous beauty of the high volcano slope with its expansive views down into the Turrialba valley. Bird highlights, in addition to the Slate-throated Redstart and its companion species the Collared Redstart (Myiobortus torquatus), were a male Slaty Flowerpiercer (Diglosa plumbea) and a pair of Mountain Elaenias (Elaenia frantzii) that seemed to be juveniles waiting to be fed.

Best of all, perhaps, was a female Purple-throated Mountain-gem (Lampornis calolaemus) that allowed close-up views for a minute or more. This individual was very easy to identify as a mountain-gem because of the rich cinnamon, almost rufous, colour of the breast and the post-ocular stripe. However, since this was a female, I am not entirely confident that this was the Purple-throated, since Garrigues and Dean (new edition of The Birds of Costa Rica) state (p. 154) that the female White-throated Mountain-gem (Lampornis castaneoventris) is virtually identical. It is noteworthy that the Latin name, castanoventris means chestnut-bellied. However, this species (previously termed Gray-throated) is supposedly restricted to the Talamanca range, which begins on the other side of Turrialba. On the other hand, the White-bellied Mountain-gem (Lampornis hemileucus) is surely found in our area but here can presumably be excluded since the female is said to be as white-bellied as the male. The picture is further muddied by the reservations expressed in Stiles and Skutch (A Guide to the Birds of Costa Rica, pp. 225-227) regarding possible hybridisation of these species.

Because of the colour of the breast and the belly, the female Purple-throated Mountain-gem in Karel Straatman’s excellent photo, below, looks very different to the one that I encountered. Where exactly was your photo taken, Karel? Perhaps this is a hybrid, an immature, or even a White-throated, if the photo was taken in the Talamanca Cordillera.

Next time I ascend the Turrialba Volcano road, I must look carefully for male Mountain-gems, where the throat colour will be a definitive marker to exclude the White-throated.

Much experience subsequent to this post has made clear that our local mountain-gem is indeed the Purple-throated Mountain-Gem.