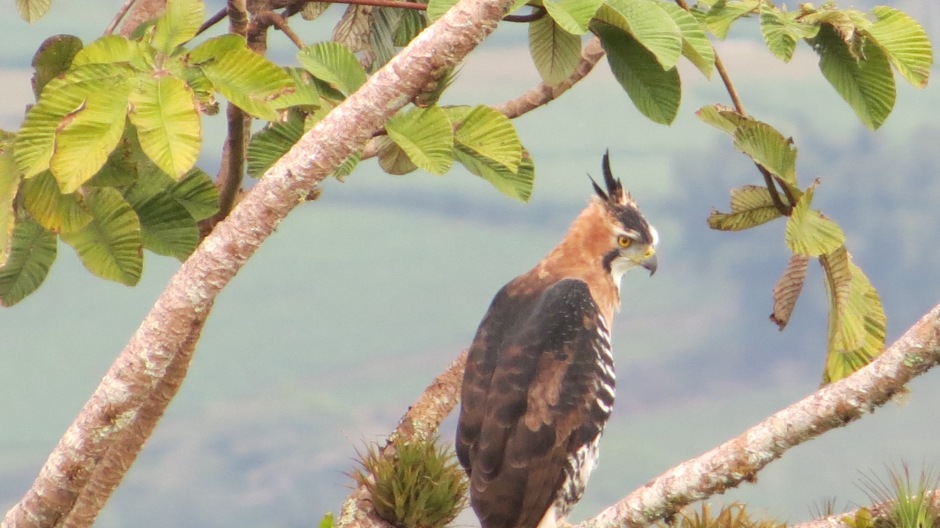 There are three species of hawk-eagle (all in the Spizaetus genus) in Costa Rica. I have seen none of them but I now have a very good chance because neighbour Sue Magree in nearby San Rafael found an adult Ornate hawk-eagle (Spizaetus ornatus) on the morning of Saturday 31st January. Sue is not a birder per se but the bird very kindly sat in a nearby tree while she photographed it. I rushed over there as soon as I heard the news, but no luck. Tomorrow morning early, I’ll try again.

Sue’s house and property back on to the Espino Blanco Reserve, which offers suitable habitat for this species. The Ornate hawk-eagle is not included in the Reserve’s Bird Checklist (see my Pages for local Checklists), but some years ago Steven Easley took a fine photo of an adult at nearby Verbena Norte. The species appears on CATIE’s official Checklist but is listed as Accidental. At Rancho Naturalista, Tuis, their very authoritative checklist includes the Ornate hawk-eagle but lists it as R6, which means it is found at the Rancho site itself, with the note at elevations between 2300-3500 ft, one or two records only, not to be expected, confirmation needed.

I’ll post again if I have any luck.  I would welcome any mentions of local sightings of this species.