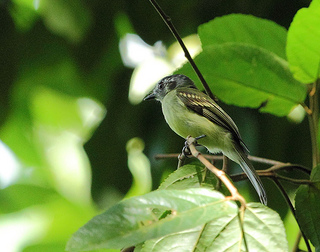 At a spot above the village where almost anything can appear, and frequently does, I was hugely pleased to find two new species for my local list. A day of fine drizzle proved to be excellent for bird watching, as is often the case. Birds don’t care too much for bright sunshine. First up was the Slaty-capped flycatcher (Leptopogon superciliatris), one of those confusing, medium-sized flycatchers that can cause so much difficulty in identifying. This one is actually not so tough because the dark ear patch of this fairly common middle-elevation species is immediately noticeable – at least it was for me. I suppose the rare Sepia-capped flycatcher (Leptopogon amaurocephalus), which should not be found in our area, could be a cause of confusion, but that one has a dark-brown crown and the wing bars are ochre in colour. These species are on page 195 of the first edition of Garrigues and Dean’s Birds of Costa Rica, where the illustrations are enormously helpful.

My great glee was compounded two minutes later when a Sooty-faced finch (Lysuris crassirostris) popped briefly into view at ground level among some ferns, at the exact same location. Again, this is a species that should be fairly common in our area, yet, like the flycatcher above, it was my first documented record in San Antonio.

My best thanks to flickr’s Creative Commons for both the pic above and the one that now follows.

The Sooty-faced finch here feeds his sooty face with papaya.