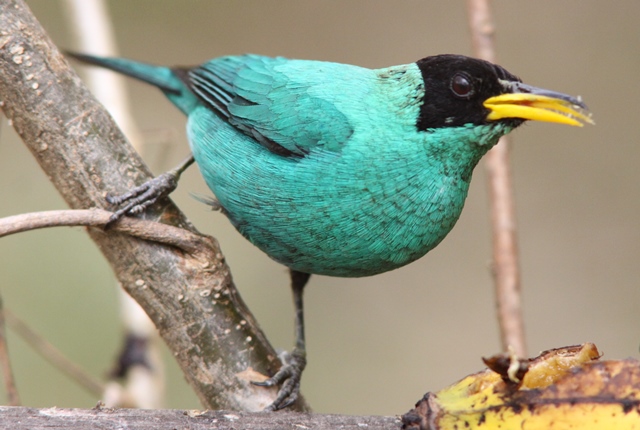 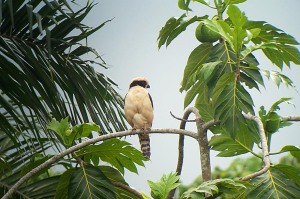 What a beauty! The Laughing falcon, a snake-eater.

Here, courtesy of Richard Garrigues, is a lovely photo of the cream-and-black Laughing falcon, known is Spanish, onomatopoeically, as the guaco.   This was the handsomest species I found on a recent two-day trip to La Suiza, a small town located on the Rio Tuis on the other side of Turrialba from us.  The town is in the lowlands, but friends Angela and Shannan Tuzo are renting a cabin a little higher up, actually on the Rio Armado.  Their courtesy allowed me to see a little of the local birdlife in an area that is close to one of the most famous bird-tour lodges in Costa Rica, the Rancho Naturalista.  I did not, unfortunately, get the opportunity to go to the lodge and meet again the gracious owner, Kathy Erb.  Still, the visit was rewarding in many ways.

From the Salón Billos, which offers delicious meals at a very reasonable price, we took a dirt road leading over the Rio Tuis and then heading upwards to give beautiful view over La Suiza and Turrialba towards the Turrialba Volcano.  The weather was hot, hot, hot, especially compared with my home in San Antonio, but we were at an altitude of probably only 750 m.

At the newly renovated bridge over the Tuis itself, we had Great blue heron, Green heron and Green kingfisher, but also two Muscovy ducks, both very dark but probably still semi-domesticated because the bridge is still very much in La Suiza.  Further up the hill, a small family of Tropical pewees was very visible and noisy, but each trip up and down the hill, between the cabin and the town, brought something a little different.

Best of all was a trip uphill with Angela, which started with the Laughing falcon and ended with an amazingly active mixed flock almost at the very end point of the path.  Here are images of a few of the most attractive species we found:

Get a Crimson-collared tanager in your binocular sights and you’ll be astounded at the beauty of its clear-cut black-and-red plumage.  We saw just one. 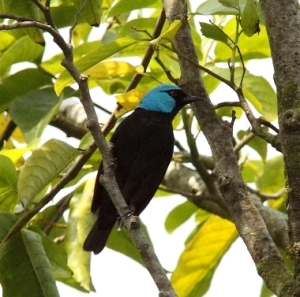 Scarlet-thighed dacnis, one species in a big mixed flock.

No scarlet thighs in sight here, and we didn’t get good views either, but there were several birds., and we’re reasonably sure they were indeed the Scarlet-thighed dacnis, a rather common but very pretty species. 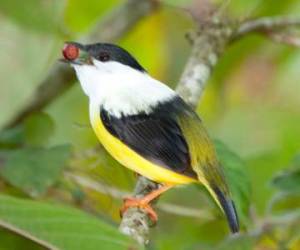 Angela was particularly impressed by her first White-collared manakin.  Unfortunately, we took no photos of this actual trip.  We also thought we had glimpses of the Long-tailed manakin but couldn’t get a clear view. 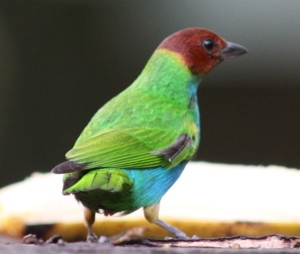 The plumage of the Bay-headed tanager always seems almost all green at first.  The only possible confusion is with the Bay-winged tanager. 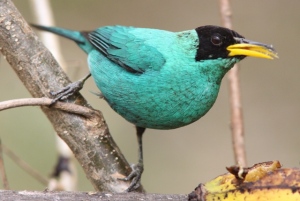 And finally the Green honeycreeper, again a common bird but always a stunner.  We saw only males.

My list for February 5th and 6th at La Suiza, without spending much time in the field:

4 thoughts on “Trip to La Suiza on the Rio Armado”