Castle at Canossa with the rock face where I finally saw the Wallcreeper!

For many, many years, whenever in Europe, I’ve been searching for the Wallcreeper (Tichodroma muraria), and, like that Northwest mountie of The Coasters in the Leiber and Stoller song, Searchin’: I knew I’d bring him in some day.

That day happened last week at the site of daughter Mariana’s newly acquired property in northern Italy.  She and husband, Enrico, live and work as architects (www.emuarchitects.com) in Cavriago, which is situated near Reggio Emilia in the plain of the River Po.  There is little chance of finding the Wallcreeper near Cavriago.  Though ruined walls do abound for it to pick at with its long, decurved bill, it generally prefers higher localities, and so, in Italy, it is restricted to the Alpine region and to the Apennines.

Twenty minutes’ drive south of Cavriago, however, the Apennines begin, and it is here that the loving couple decided to purchase their future home at the base of the famous castle of Canossa.  This explains my visit to that locality, where I had a much better experience than did the Emperor Henry.  I would, however, have kissed the scratchy feet of the Wallcreeper if it had allowed a nearer approach.

Upon arrival at the huge abandoned house that will become home for my daughter and son-in-law, I first was shown a pair of Tawny owls (Strix aluco), one grey, one brown, roosting near the top of the roof. 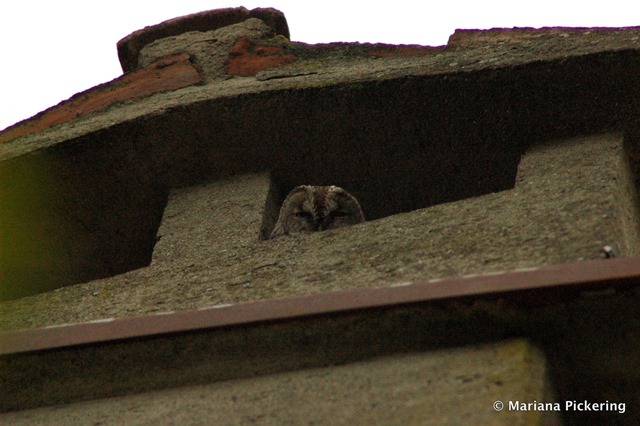 One of the two Tawny owls roosting at the house – Guido il Gufo!

Thus, the bird list for the new house was begun, and a Green woodpecker (Picus viridis) and a Redstart (Phoenicurus phoenicurs) soon made brief appearances and were added to it.  Italy, like Europe in general, is full of ancient ruins, many perched atop cliff faces, and I never fail to scour the rocks for any sign of the Wallcreeper.  Though I have had much luck in such locations with Crag martins, choughs, Alpine swifts and even vultures, the picchio muraio, as the Italians call it, has always remained for me just a tantalising illustration in the bird guide. 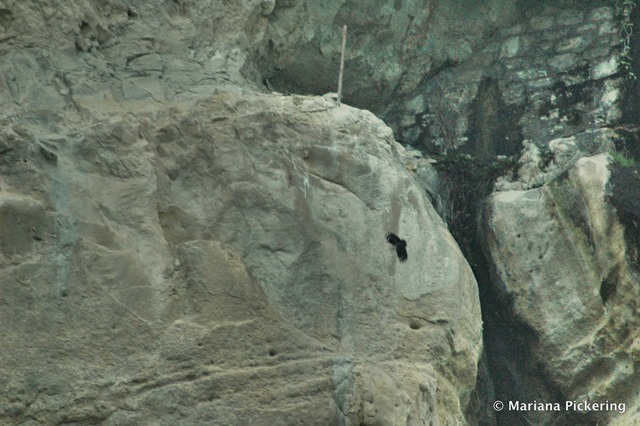 Here’s the rock face, but you’ll have to zoom in for the Wallcreeper!

Well, a picchio is a woodpecker, but the Wallcreeper is actually rather closer to the nuthatches taxonomically, and shares their clinging habits.  Mariana and I had walked two minutes from her new prospective home and were peering upwards towards the Canossa castle when she noticed a small bird fluttering high up on the sheer rock wall below the castle ruins.  Any bird at all would have been a welcome sighting, but what a huge shock and surprise it was to see the flash of purplish-red in the wings and to realize that, finally, I had the Wallcreeper in my sights!  We could have looked at him all day but the views were from too great a distance to allow a photograph.  The Wallcreeper cannot be confused with any other bird, neither European nor Central American!  He flutters his wings constantly as he tries to get a foothold on the cliff, thus revealing the beautiful red wing patches.

Just a hint of red. No nearer approach was possible.

I am now in the beautiful ancient town of Todi, further south in Umbria, where I continue to scan the vast expanses of ancient walls in the hope of repeating my find.  I fear it will be in vain, though the Wallcreeper has nested in eastern Umbria and occasionally, during the winter, appeared not too far from Todi, it seems.  Still, in one week’s time we return to Cavriago and Canossa, where I’m pretty sure my bird will still be waiting, hanging on the cliffs below Mathilda’s famous castle, meeting place of popes, kings and, now, birdwatchers.

2 thoughts on “Wallcreeper at last!”