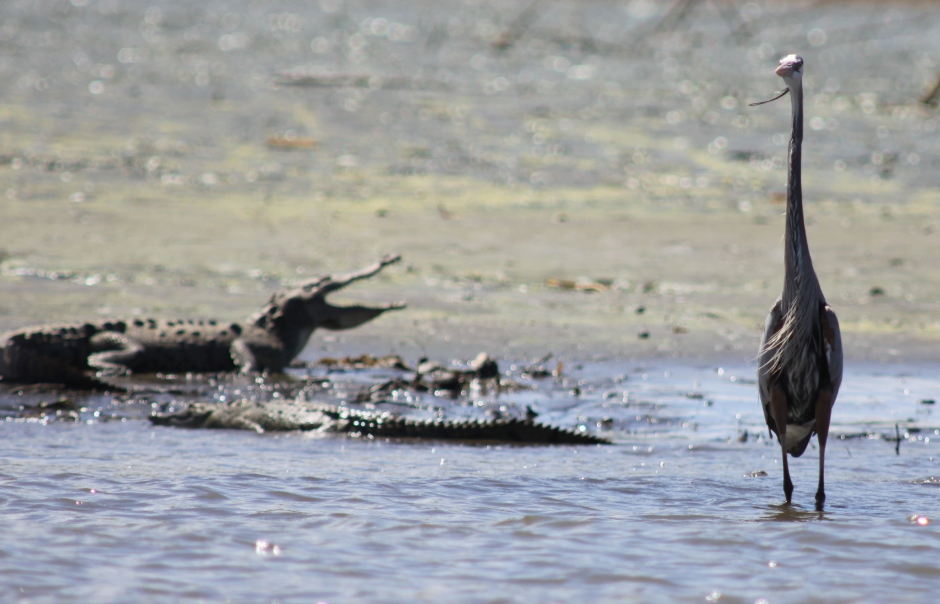 A common but majestic bird, the Great blue heron (Ardea herodias) is familiar to almost all birdwatchers, both here in Costa Rica as well as in North America. Here in San Antonio, however, at 1200 m elevation, I had not noted this species until today when one flew over the house, heading west. I’m glad it didn’t pay a call to my ponds because I don’t want it taking a fancy to my koi, which are now almost ready to breed. Take a look at Karel Straatman’s great pic below, which lets you know just what the Great blue heron is capable of devouring. This one was in Florida.

Great blue heron has a snack

The Costa Rican lowlands will give many opportunities to see herons, but here in San Antonio, the only heron regularly present (not counting the Cattle egret) is the common and widespread Green heron (Butorides virescens). One sometimes sits by the pond and picks off some of the smaller fish, and a pond full of water hyacinth down at the bottom of the village also hosts a pair. The mountain streams seem rarely to be visited by herons, although I have seen the Great egret (Ardea alba) up just past La Pastora, at the limit of its elevation range.

Friend Chalo Porras reports a possible immature night-heron at our nearby bridge over the Quebrada La Loca, but this is still to be confirmed.

This is my third post in as many days, owing to unexpected sightings. I’ll close this one with a photo of the well-named Dusky-capped flycatcher (Myarchus tuberculifer), a species which is nesting somewhere nearby for the first time in my five years here.