My first decent hike since coming back from the dead took me up the Guayabo road to the little hamlet of Torito, from there to the even tinier Las Abras on the Santa Cruz-Los Bajos del Volcán road, and then back down, now in the rain, to Guayabo.  As usual, nothing was planned, but just to walk in the mountains was a tremendous delight after my enforced absence.

Forest remnants of reasonable size begin just after Guayabo.  I must explain that I’m talking about Guayabo Arriba, up much higher than Guayabo National Monument.  The right-hand side of the road affords terrific views down to the Caribbean, with the thickly wooded cleft gorge of the Rio Guayabo in the foreground.  Unfortunately, the La Muralla waterfall cannot be seen from above.  There are many cascading streams coming from the left, i.e. from the volcano slope, but aquatic species are rare because of the scarcity of fish. 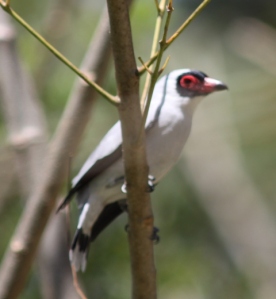 First species of note was a single grunting Masked tityra (Tityra semifasciata).  They always seem to perch high, and it’s a species that is being tracked in the biological corridor programme.  It’s a fairly common bird but it’s very handsome with its contrasting black wings on a white body.  Its red face is a clincher for separating it from the similar but rather uncommon Black-crowned tityra (Tityra inquisitor).

I had decided to visit a friend who was building a house just up above Torito but the locals told me he was away on business in Limon.  One friendly local invited me in for pancito, cheese and coffee, before I started the steep uphill slog to test my strength.  The landscape is beautiful but pastureland is still much more prevalent than forest remnants.  The cloud forest begins above Las Abras, which is 7 km from Santa Cruz on a reasonable dirt road.  The road continues for about another 13 km to Bajos del Volcán and quetzal territory.  I got lost for a time before emerging at the road just above Las Abras, a short way below the cloud forest.

Warblers.  The forest remnants on my right provided good views of Rufous-capped warbler (Basileuterus rufifrons)  and Slate-throated redstart (Myoborus miniatus), two resident warblers.  The latter is a medium-elevation bird but I have not found it lower than Santa Cruz so far, 200 m above San Antonio.  It is easily recognisable from the fanned tail with prominent white in the edges.  The former is not a highland species and is mostly found on the Pacific side, but it is at the eastern end of its Central Valley range here near Turrialba.  It appears very rarely in San Antonio, in my experience. 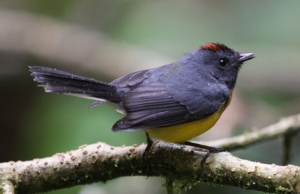 The other two warblers I found were the Blackburnian warbler (Dendroica fusca) and the Black-and-white warbler (Mniotilta varia).

Both of these seem to be among the first migrants to arrive in our area.  The Mniotilta is not found frequently downhill at CATIE, so it seems to prefer higher ground, without being a mountain species.  It is easy to recognise both because of its black-and-white stripes and its habit of creeping along tree branches.

Flycatchers are always an identification problem.  I was fortunate enough to see several Mountain elaenias (Elaenia frantzii) on this walk and to be rather more certain of the identification than on previous occasions.  It looks much like the very common Yellow-bellied elaenia (Elaenia flavogaster) but has no crest.  The only other flycatcher I saw was a probable Olive-sided flycatcher (Contupus cooperi).  It was perched on a high bare branch, rather too distant to be seen very clearly, making sorties and returning to the same location each time.  My first thought was that it was our commonest Contupus, the Tropical pewee (Contupus cinereus), but at that elevation it seems unlikely.  Because of the distant view, I couldn’t be completely sure, even though the Olive-sided is a considerably larger bird.  No other flycatchers were recorded except the beautiful Long-tailed silky-flycatcher (Ptilogonys caudatus), which actually belongs to a different family altogether.

I didn’t have to walk the 7 km to Santa Cruz from Las Abras because a local man passing on horseback showed me a good dirt road down to Guayabo.  This puts my home at perhaps only three hours’ walk, uphill, from Las Abras, a maximum of four from the cloud forest and the possibility of seeing the near-legendary Resplendent quetzal (Pharomachrus mocinno). 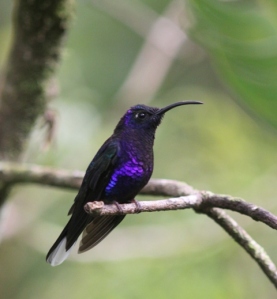 The locals call the sabrewing the colibrí de montaña, although it is not specifically a mountain species, while the mountain-gem certainly is.  I have seen it quite frequently in the mountains here, and despite the range maps in the field guides I have not so far been able to identify the very similar White-throated mountain-gem (Lampornis castaneoventris) in our area.

The list of birds for the day, excluding my common garden species, is completed by the Mountain robin (Turdus plebejus), a darker version of the Clay-coloured robin (Turdus grayi), Costa Rica’s national bird, and two tanagers.  These were the very pretty Silver-throated tanager (Tangara icterocephala) and the Common bush-tanager (Chlorospingus ophthalmicus).  Both of these are very commonly found starting at the altitude of Santa Cruz (1440 m) .

I am very pleased to have found some more good birding habitat within striking distance of my house, and a beautiful, and shorter, walk up to the cloud forest.  All the fine photos are courtesy of Karel Straatman.  Come back soon, Karel!