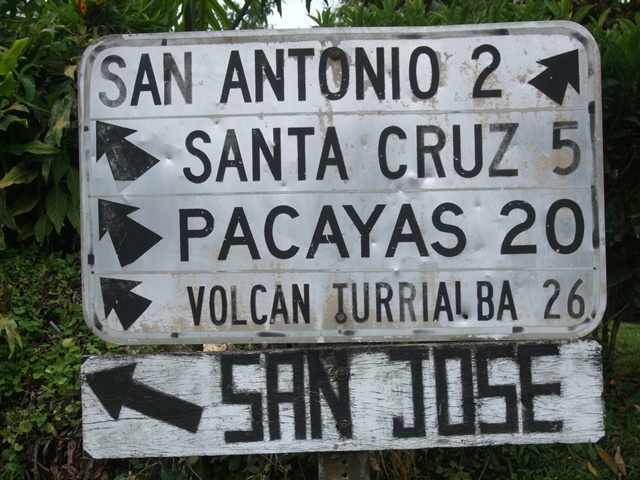 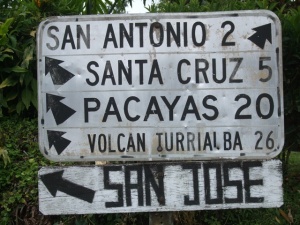 This is where you are!

Just when you think you know your home patch, you don’t!  An initial exploration this week of just a small patch of forest among the dairies between San Antonio and the nearby village of El Carmen yielded three species new to the San Antonio list (now standing at 137 species).

I was heading uphill towards Santa Cruz and Guayabo on our badly crumbling dirt road when I glanced over to the left to the thickly wooded hills above the Rio Guayabito; thickly wooded is a comparative term in this area of small, cheese-producing dairy farms, where the most frequently seen birds are black flocks of grackles and white flocks of Cattle egrets.  The tallest trees on the hills are the stands of eucalyptus that mark the village of El Carmen up on the main road to Pacayas.  That’s where I’d played football several times and discovered the trillo, a cowpath actually, connecting El Carmen and San Antonio.  It comes out in San Antonio just opposite the biggest house in town, which stands on the right a little bit higher up the hill than the headquarters of the Turrialba Volcano park guards, my next-door neighbours.

I had always planned to scout the forest patches to see if they hold any forest species that have managed to hold on in an area that originally was very heavily forested, but ….  Perhaps familiarity breeds contempt.  At all events, this day my glance over towards El Carmen took me through the gate to the dairy on the left above doña Blanca’s and across the open fields.  It was mid-afternoon with heavy clouds over the mountains.

Piratic flycatchers and Yellow-green vireos were calling in the garden as I left, but the path down to the Rio Guayabo held nothing but Rufous-collared sparrows and Yellow-faced grassquits.  Still, it was a beautiful afternoon for a stroll.  Here’s a nice photo of the pretty little sparrow that I sometimes take for granted, courtesy of Karel Straatman.

To get to the Rio Guayabito at this point, you have to go through a couple of portones.  In England they’d have stiles but here they just drag a line of stakes across that are attached by barbed wire and then hook the last stake to another one that’s fixed at the side.   The path is muddy and covered in cow patties.  At the river the crossing was easy enough over the rocks despite the rain in the mountains.  It’s only a few yards across, and the few cows in and beside the river reminded me why no-one further down in San Antonio would dream of drinking the water directly from the river.  I looked in vain for the Sunbitterns and chirascuá that frequently call from that area and then followed the river uphill.  A band of Gray-headed chachalacas was the only signs of bird life until I headed into the forest.

There is little difference, it seems to me, between walking in this patch of remnant forest and treading a forest path in some of the fabled parts of the country.  The vegetation is just as beautiful to behold, and the birds conceal themselves just as easily.  They call from a maddeningly close distance but are so hard to find among all that foliage.  Sum total inside this forest remnant: one species, the Olivaceous woodcreeper (Sittasomus griseicapillus).  It gave its little trill and allowed one fairly decent look in what was already the semi-dark.  It’s neither a spectacular nor a rare species, but it’s the first I’ve seen on my home territory and so it made my day.  Woodcreepers in general are an identification nightmare but fortunately this one is the only small, short-billed guy with no streaking.  The only other woodcreeper I have been able to identify in San Antonio is the slightly larger Streak-headed woodcreeper (Lepidocolaptes souleyetii).  It was reasonably easy to find in my first year here but  I have not been able to report it for quite some time now.

Back out of the thick woods and now covered in sweat from the high humidity that results from all the vegetation, I plodded uphill towards El Carmen with mist and clouds now coming in both from the mountain and the Caribbean and was rewarded with two unexpected species that are surely always in the area but that are new additions to my San Antonio list.  First up was the White-naped brush-finch (Atlapetes albinucha), previously called the Yellow-throated brush-finch.  It has both a white nape and a yellow throat, so you can understand the confusion.  It’s a fairly common bird of middle elevations, they say.  A pair of them were in low brush at the forest edge.  Immediately afterwards, I spotted a Gray-crowned yellowthroat (Geothlypis poliocephala) taking food to its nest in a large tussock of grass in the middle of the overgrown cow pasture.  It seemed to raise the feathers on its head somewhat in alarm.  The male is fairly easy to distinguish because it has a grey head with just a bit of a black mask.  This one was definitely a male, and I say thank goodness because the females are a much tougher id.   I am very familiar with the Common yellowthroat (Geothlypis trichas) of North America, but it seems not to be common at all in Costa Rica.  The Olive-crowned yellowthroat (Geothlypis semiflava) is frequently caught in the mist nets down at CATIE but has not yet appeared up here.  The Garrigues guide puts its usual elevation limit at about 1200 m, which is exactly the altitude of San Antonio.

With three new species for the home list, I was able to saunter back down the hill with a smirk on my face but wondering what else might turn up in all the other little local spots that I still haven’t gotten around to visiting.