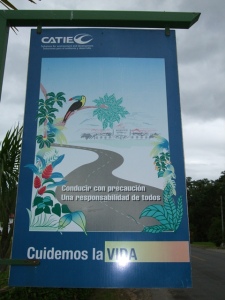 On 17th December, 2010, the CATIE Christmas Bird Count took place at the beautiful Turrialba campus.  The weather cooperated nicely for a bird count that totalled 110 species, 31 of them new to the Christmas Count, which is in only its third year.  We missed many species that should have been easy pickings (Groove-billed ani, for example!) but we had a very enjoyable day and a fine feast of grilled meat at the Botanical Garden at lunch-time.

We had an excellent turn-out for the count and for next year it is hoped that we will have enough knowledgeable personnel to split into several groups.  This year we had two groups, one concentrating on the main campus areas, while the other covered the finca area, which is located on the other side of the highway.

There were several unexpected highlights, although I missed some of them because they were reported from the other group, led by Pablo Elizondo.  Perhaps the best bird was the Long-tailed tyrant (Colonia colonus), a species I have seen only once before, and that was in the Caribbean lowlands of Maquenque.  I missed it here but much enjoyed the pair of Pale-billed woodpeckers (Campephilus guatemalensis) that gave us close-up views, the Osprey (Pandion haliaetus) over the lake, and the nearby Laughing falcon (Herpetotheres cachinnans). 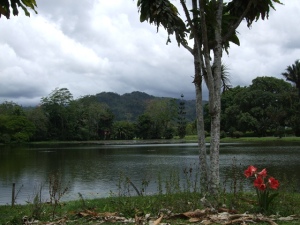 View of the lagoon at CATIE

The island in the lake was quite devoid of it usual herons and egrets, and we missed not only the Boat-billed herons and the night-herons, but also the Green ibis that is commonly found on the grassy areas nearby.

Here in San Antonio, December was very rainy, particularly the second part.  On the other hand, the Sunbittern could be easily found up by Quinta San Antonio, and the Mountain robin (Turdus plebejus) is now here so frequently I’m wondering if I was overlooking it before.  I still couldn’t find the Black guan (Chamapetes unicolor) that has been seen at Quinta San Antonio, but I thought I heard one at San Rafael on the trail up to don Tobias’s house.  Toby and Sue’s house has a spectacular view and I must mention the eye-level view of a Peregrine falcon  (Falco peregrinus) up there on December 18th.

The bird flew by several times, close up and personal, and I only wish I could have seen it two kilometers away in San Antonio, where so far I have not been able to record a single falcon of any species.  The photo above I took in California at a later date.

It’s a really beautiful short walk up to the top.  It leads past some excellently located cabins, Cabañitas El Bosque, owned by don Alejo.  These are kept in immaculate condition and are highly recommended.  The White-faced monkeys don´t come down as far as there, but the Juan Espino Blanco Reserve is right at the side and the whole area deserves much more of my attention.  The latest little walk produced a lot of warblers, including Tropical parula (Parula pitiayumi), Blackburnian warbler (Dendroica fusca) and a very nice pair of Roadside hawks  (Buteo magnirostris). 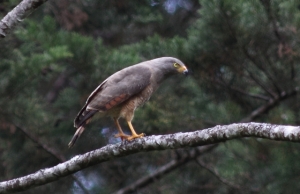 Usually, this is the nearest place for me to see Blue-crowned motmot  (Momotus momota), but I managed finally to get one at San Antonio this week in a shady spot just near the Las Truchas bar.  I was thus able to add it to the San Antonio list.  That’s my house list and now stands at 130 species, with an additional 127 identified in the Turrialba area.

Red-headed barbet at a banding station

Bird of the month, a lifer and new addition to the house list, was the Red-headed barbet (Eubucco bourcierii).  This little beauty popped up on the roadside as I walked up to Santa Cruz to get the bus to Capellades.  The truck had broken down, yet again, this time in the little mountain town of Capellades.  It was actually a pair of barbets, the female being much less spectacular.  I got several nice looks before they disappeared.  Although the species is rated as fairly uncommon, it should really be able to be found here with more regularity because it’s a bird of middle elevations.

Elaenias continue to be frustrating, but I think I’ve decided that I’m not seeing any Lesser elaenias (Elaenia chiriquensis) at all.  The crestless ones must be Mountain elaenia (Elaenia frantzii), since I believe the common Yellow-bellied elaenia (Elaenia flavogaster) cannot flatten its crest completely.  This means that a couple of nice photos I took and named flavogaster must be frantzii.  I believe one features in an earlier post.

Now that the sunshine is back, together with the New Year, I’m hoping to get better looks at some of the species that have disappeared lately, chiefly hummingbirds and woodpeckers.