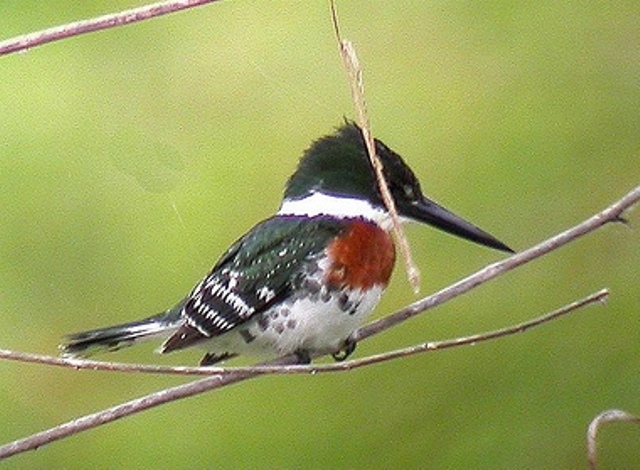 Male Green kingfisher, this one from Texas

My garden pond is a large puddle really, but how lovely to now have a resident Green kingfisher (Chloroceryle americana) chomping down on the tiddlers.  I’m hoping the koi are too big for his beak.  It’s a beautiful male with chestnut breast and sits either on one of the folding canvas chairs or else on a forked stick that we run the hose through when we need to aerate the water.  The pump is still not up and running because I’m not up and running with this damn leg problem.

On the kingfisher’s  third day, he unfortunately flew into the window of the living room.  Happily he flew back to his perch, none the worse for wear.  We have to be careful about leaving the curtains wide open, as we have had several unfortunate accidents now.

In the heavy rain of November,2008, a Green kingfisher flew by the window a couple of times.  This was my only sighting of the species at the house, until this recent arrival.  I did see one individual at the Bajada, just below Gerardo’s house, but that’s been the only sighting on our local rivers.  They have very few, if any, fish, and so attract very few waterbirds.

Let’s hope this male will soon be joined by a mate.  I hope to snap some photos if he decides to hang around here permanently.  I can also hope for a Green heron (Butorides virescens), since I have seen this species here at the house, once, and down at some water-hyacinth-choked ponds at the entrance to the village.

One thought on “Green kingfisher at my pond”