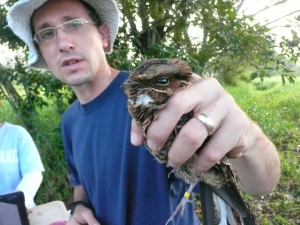 A bird in the hand

Daybreak now arrives a little earlier and so the bird-banding now starts at 5.00 am.  This morning, I enjoyed a cool drive down the mountain until the hot day at CATIE began.  Despite having to set off at 4.30 am, I still had time to stop off at La Castellana bakery in Turrialba to buy a bag of galletas de pobre, a dry and plain biscuit (or cookie as the Americans call them) that matches my budget as well as my taste.

It was an exciting day.  We switched the location from the planned sugar cane fields to the cerca viva (live fence), which has small patches of trees in a fairly open landscape.  For birds, it is remarkably productive, and today brought three noteworthy captures, a Common pauraque (Nyctidromus albicollis), a Wilson’s warbler (Wilsonia pusilla) and an Olive-crowned yellowthroat (Geothlypis semiflava).

The pauraque caused quite a stir for several reasons.  Firstly, it was not easy to determine the species because of its similarity to the Rufous nightjar.  Once determined, the bird is remarkable in the hand for the huge size of the gape, which it opens while uttering a rather dreadful croak.

Unfortunately, when released after banding, our bird headed straight back into the nearest net.  Fabrice immediately retrieved it and set it free once more, but it was immediately attacked in its low flight by a small hawk, not much bigger than its prey.  Pursuer and pursued disappeared further down the hedgerows, accompanied by a huge racket from Grey-headed chachalacas and Brown jays, and we then found the hawk with the pauraque pinned to the ground in the very bottom of another of the mist nets.

Male pauraque about to fly to its doom

No binoculars!  I fancied the hawk to be bluish grey above and lighter below, with a longish tail, but it was just a brief look before it took refuge in a nearby thick bush.  We then had to retrieve several netted birds a little further along, and when I looked back at the pauraque, the hawk seized it in its talons and flew off with its prize.  Binoculars and camera were both too far away at the processing table.  The literature says that the immediate suspect (to me), the Cooper’s hawk (Accipiter cooperii), has left the country by the end of March, and, in any case, it would be a rare bird here.  If it was a Sharp-shinned hawk (Accipiter striatus), the same limitations apply, and in addition, a male sharpie would be the same size as the pauraque.  I exclude females of both species because of their brown plumage.  Other candidates, I suppose, might include the Bi-coloured hawk (Accipiter bicolor) or the Tiny hawk (Accipiter superciliosus), both of which are species with which I am quite unfamiliar.  The latter can, presumably, be excluded on the basis of size, while the former seems to prefer a forest environment.

Here’s Fabrice untangling the pauraque for the second time.  If he had known what was coming, he wouldn’t have been smiling.

Fabrice's smile will be short-lived

The second bird of note today, the Wilson’s warbler, is among the now dwindling numbers of migrants but is usually found at higher elevations.

Alejandra calculates that this was only the third capture of this species at CATIE in the two years of the programme, but I do see it with some frequency up at Santa Cruz and La Pastora.  This bird had an almost complete black cap, distinguishing it from the Yellow warbler (Dendroica petechia) (acquiring red breast streaks) that had been our first bird of the day.

Item number three of note was a life bird for me, the Olive-crowned yellowthroat.  I have perhaps seen this common bird before, without clearly distinguishing it from other yellowthroats.  This male was, however, quite distinctive, with his black mask adjoining the olive crown.  He flew off before the photo-shoot, however.

We had a good haul today, but it would have been better, had we not had to close several nets early because of the presence of the hawk.  Unfortunately, he never reappeared and so remains a ‘mystery hawk’.  I have seen no other accipiters in the Turrialba area at all in my two years of residence.