After a week’s absence, my return on Wednesday to bird-banding at the CATIE, here in Turrialba, brought a red-letter day and two life birds.  The Worm-eating warbler (Helmitherus vermivorum), minus worm, was the first to entangle itself in the mist nets that we set up in the ‘abandoned coffee’ section of the CATIE grounds.  Note that it eats worms in Latin also.  I had struggled again putting the nets up.  I can always find at least one new error to make, and my knot-tying still leaves much to be desired.  I would like to number all five loops on each of the ten nets so that I simply cannot get them out of order.  Thankfully, Carlos also volunteered on this day and he unraveled all the twists.

The Worm-eating warbler was new to me.  It spends its summers in the eastern USA and so I had never seen it before.  In Costa Rica, it is judged uncommon, both as a migrant and as a winter resident.  Had Alejandra not identified it immediately, I think I would have plumped for a Three-striped warbler (Basileuterus tristriatus), at first guess, since that species is supposedly common.  Alejandra says, however, that she has never seen it here, and neither have I, of course.  Well, the Three-striped warbler is yellowish below, while the worm-eater is buff-coloured, so I probably would have been able to make the distinction in the field.

Sensation of the day for the visitors was a Violet sabrewing (Campylopterus hemileucurus), glistening magnificently in the sun.  It is rare at this altitude, and Ale says it’s the first they’ve banded here.

A rare visitor to the lowlands

The second lifer for me was the Western slaty-antshrike (Thamnophilus atrinucha), whose hyphen is a complete mystery.  It has acquired both the hyphen and the epithet ‘Western’ in the Garrigues guide, but is a plain Slaty antshrike in Stiles & Skutch.  It is again termed a ‘common to abundant’ bird in the lowlands, rare in the foothills, but it had hidden from me for many years.

This day, the birds were as abundant as the mosquitoes, and we captured several species that I had not seen well at close quarters before (White-collared manakin, Plain xenops), as well as some of the species that fall into the nets with some regularity (Stripe-throated hermit, Ovenbird, Chestnut-sided warbler, Thick-billed seed-finch).  The White-collared manakin (Manacus candei) was, perhaps unfortunately, a juvenile, but it still made a pretty picture.

It is the male of this species that makes, with its wings, the loud snapping sound heard so frequently in the Caribbean lowlands and foothills.  Like whip and top day in England.

The Plain xenops (Xenops minutus) is just a little woodcreeper, but unlike many of that family it is fairly easy to recognise by its malar stripe.  It posed very nicely for this picture. 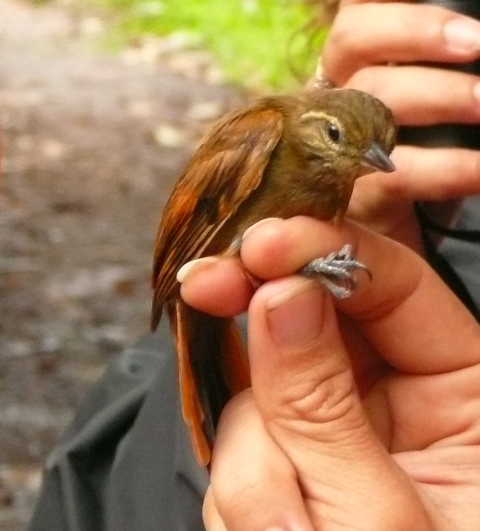 The final bird of the day was a woodcreeper that was much more difficult to identify, and I will dedicate a separate post to him.  Here’s  final shot of the much-admired worm-eater just before he flew off in search of, well, worms, I suppose.

Ale holds the worm-eater captive for the mugshot