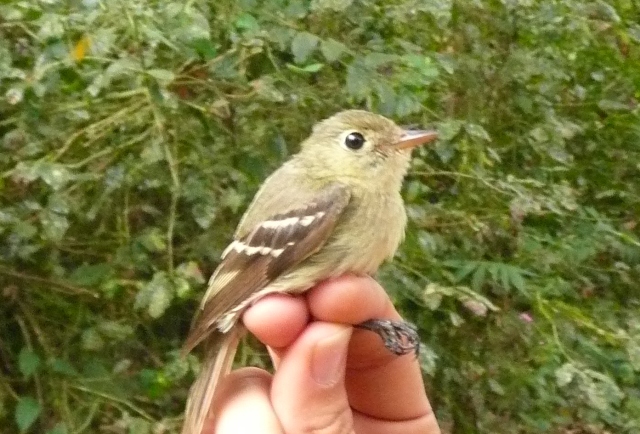 Guide book open, just to be sure

Maybe I’ve seen this Empidonax flycatcher before, maybe not.  Who knows with this utterly confusing bunch, all small, and all with eye-rings and wing-bars?  Unless they give a call note, an identification in the field seems pretty much impossible.

Costa Rica has seven species (eight if you split the Traill’s into Alder (alnorum) and Willow (traillii)), three of which are native birds.  One of these, the Yellowish flycatcher (Empidonax flavescens), looks like it might be distinguishable in the field because its eye-ring extends visibly behind the eye.  It’s a moot point for me so far, because I haven’t seen one yet, despite its guide-book status as common in our area.  The second native species is the White-throated flycatcher (Empidonax albigularis), which may well be identifiable because of the contrast between its white throat and its brown chest.  I’ll probably never know, even though it is said to be fairly common just one volcano away from here,  at the base of Irazú, the highest volcano in Costa Rica.  Well, maybe I do have a chance, because a trip to the Turrialba Volcano in March last year brought me a life-bird in the shape of the third native species of Empidonax, the Black-capped flycatcher (atriceps).  Happily, this guy, with his black crown and oval-shaped eye-ring,  is not only even prettier than his Empid colleagues, but is also safely identifiable in the field. 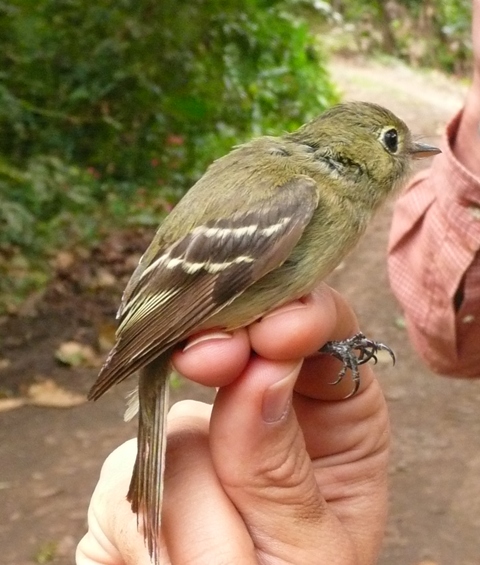 Yellow-bellied flycatcher with eye-ring and wing-bars in evidence

Of the remaining four species, all North American migrants which I never could distinguish during thirty years in Texas and California, I had seen nary a one here in Costa Rica until this week.  A Yellow-bellied flycatcher (Empidonax flaviventris) flew into the nets at CATIE on Monday morning.  When you’ve got the bird up so close, they seem to look so different in all their detailed glory, and at first I didn’t even recognize it as an Empid.  There are numerous other small flycatchers here, from elaenias to bentbill, flatbill and who knows what, (not to mention greenlets), that muddy the picture.  Just take a look at pp. 194-195 of Garrigues & Dean‘s excellent guide The Birds of Costa Rica. Fortunately, Alejandra, resident bird expert at CATIE knew what was what, and because of the markedly yellowish plumage it seems that all we had to do was to rule out the flavescens. Measuring and weighing clinched it, and, although I may never be able to separate the remaining three migrant Empids, now I have another bird to add to my life list, the Yellow-bellied flycatcher (Empidonax flaviventris).  Here’s a final photo.

Time to let me fly

One thought on “Yellow-bellied flycatcher in the hand”