This post refers to a wonderful hike that I did, with guides fortunately, earlier this year in the month of May.   This weekend trip up to the Turrialba volcano and then down to the Caribbean was absolutely fantastic.  The weather was cloudy but dry and my wife, Ches, took me up calle Vargas a few kilometers out of Santa Cruz as far as the intersection with the road that goes to Las Virtudes.  Las Virtudes, by the way, is also said to have resident quetzals.  The Ford Ranger is just a two-wheel drive and to try to go much further would have been pointless in any case.  However, the 15 minute trip in the truck from San Antonio saved me a lengthy walk through areas that I already know quite well.  As soon as my wife dropped me off, I got my first-ever look at the Spangle-cheeked tanager (Tangara dowii).  It´s a common enough highland species, endemic to Costa Rica and western Panama, but it was a life bird for me at the time.

I wandered uphill for only a little while with forest remnants now replacing the Santa Cruz dairy farms, but I was lucky to catch a ride with a local family.  German and Xiomara were taking their five-year-old son up to their weekend cabin close to my overnight destination of Los Bajos del Volcán, which is pretty much the last community when you head uphill on this side of the volcano.  We didn´t know each other then but are now fast friends.  Local people bend over backwards to help you around here.   German told me that there were quetzals in the cloud forest in that general area although not near their cabin.  After the little dairy community of Las Abras the cloud forest pretty much begins.  I wasn´t able to do any birding, however, until we got to the point in the road where German and Xiomara had to leave their truck and walk forty minutes or so to their cabin, at a virtually uninhabited place called La Lorena.  They invited me to spend the night with them, since my intention was to spend the night at Los Bajos and then walk down to the Caribbean lowlands the next day with guides.

I was amazed, first of all, by the length of the walk to the cabin because they had the child plus lots of stuff to carry.  Also, we had to pick up big buckets of water about a half kilometer from the cabin and carry that in so that the toilet would function.  I was amazed, secondly, by the very rustic nature of the cabin.  We ate well once German got the stove going, swilling it down with the typical black coffee that everyone drinks here.

I spent the rest of the day birding around the cabin, partly in the company of German, but it was now very cloudy and a fine mist was falling.  The only neighbour is an  old guy who has lived there for forty years in another cabin several hundred meters lower down the slope.  I got several typical highland bird species close by the cabin, including the rare Ochraceous pewee (Contopus ochraceus), another first for me. 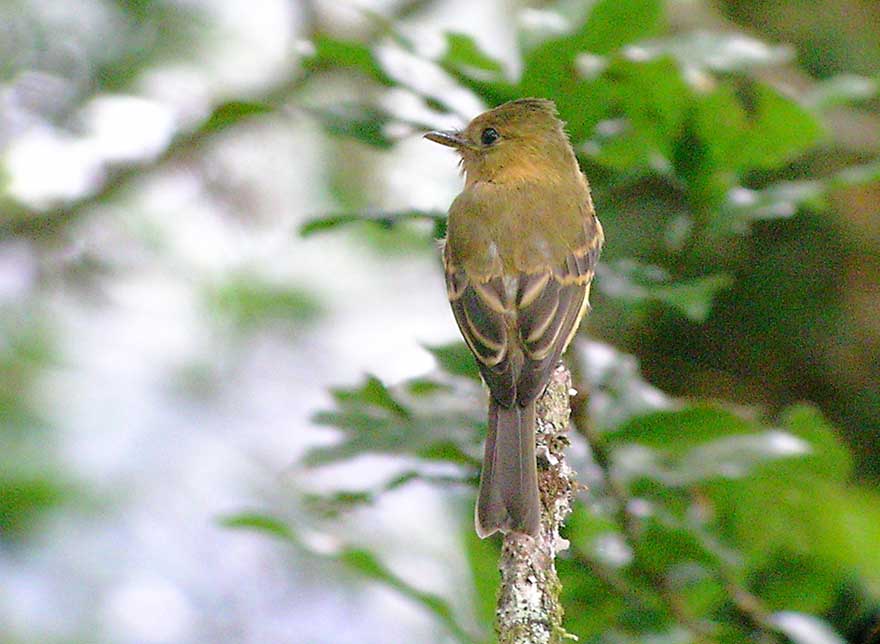 But when we told the old fellow that I was hoping to see quetzals for the first time in my life, presumably at Los Bajos the next day, he  showed us a quetzal nest that turned out to be just a hundred yards from German`s cabin.  German was as astonished as I was.  It was misty and getting dark, but I managed to get a not very satisfactory glimpse of two females.  The first one popped out of the nest when our friend banged on the base of the tree, a 100 foot high stump, with a stick.

We had a cozy night in the cabin sleeping right bang next to each other, the five-year-old son in the bed with his parents.

The next morning I went alone stumbling at first through the semi-dark back to the dirt road, and then down to Los Bajos.  Here I had no time for breakfast because I had almost mistimed my arrival, so I immediately  joined a group of four to walk to the Caribbean town of Suerre.  The other hikers were nice guys from San Jose but were not birders.  The two guides were just young kids from Suerre.

It took eight hours to complete what was, for me,  a tough but sensational hike.  Fifteen minutes down the path we had ten Resplendant quetzals (Pharomacrus mocinno) doing ridiculous aerial displays in bright sunshine and in the open, alongside the river.  The guides said they had never seen anything like it before, because the quetzals are usually found in much smaller numbers.   The other hikers took many photographs, but unfortunately they never did contact me again with the promised copies.   The guides, though very young, were very knowledgeable about both birds and plant and animal life.  One of them  got bitten badly by a hornet and his face swelled up.  The rest of us were lucky to escape. Here’s a male quetzal by kind permission of Richard Garrigues here in Costa Rica:

First views of this bird are simply amazing

The first part of the hike was like a beautiful walk in the park with huge scattered cedros along the Río Guácimo.  I was thinking that it had been needless to hire guides, but the second part, introduced by a really pretty lake with Least grebe, and then by White-faced monkeys, was a real test of stamina.  After the lake everything was pretty much thick rain-forest, with several encounters with Howler monkeys.  Bird highlights were a beautiful Golden-browed chlorophonia, glistening green in bright sunshine, and the constant eerie but melodic whistles of the Black-faced solitaires.  I hear this bird every day in my garden because Adriana and Asdrúbal, our close neighbours, have one in a cage, as do many locals.

Now in the lowlands, we stopped briefly at a cabin that is in even more dilapidated condition than German’s.  It is  equipped, however, with bunk beds for those who do the trip in two days.  I would definitely recommend a two-day trip, because it was almost impossible for me to do any real birding owing to the pace of the walk.  Only one group per month takes the path.  When the afternoon rainstorm came in, the birding was over, unfortunately, and the path, such as it was, became, literally, a stream.  I think I fell at least five times, ending up sitting in water up to my waist several times.  When we came out at the bottom we crossed a very rickety bridge over a chasm with foaming white water and then we were 10 km from Suerre.  Here there is a dirt road, and an SUV, belonging to the folks from San Jose, was waiting for us.  At the bridge, we heard the call of a Rufous motmot but couldn’t catch a glimpse.
The guides had hiked up the path the day before in nine hours.  I don’t know how the hell they did it, uphill, but they had to check that it was passable.  I had wanted to do the hike alone so as to be able to bird-watch freely, but I really could not recommend doing it alone.  I’m sure I would have got lost.

We cleaned up at the house of one of the guides and then ate in a very nice restaurant in Suerre, which is just off the main road between San José and Limón.  My wife picked me up there.  For their labour, the two guides, who were very well informed about birds, animals, plants etc., demanded 5000 colones, that’s about $9, from each of the three of us.  I felt obliged to give a tip, despite my Yorkshire heritage, because it seemed shameful to pay so little.  Perhaps if everybody had been a foreign tourist they might have charged more.  I don’t know.  Helberth Chavarria Madrigal at helberthchamo@yahoo.es is the guy to contact in Suerre.  His phone number in Costa Rica (cellular) is 8 334 28 61.

I actually only got about 50 some bird species (most quite common, but several life birds for me) because of the rain and not being able to stop at will, but, according to the guides, a group of ornithologists last year got 250 species in two days doing the same hike.  I was surprised how easy it is, however, to get to where the quetzals are.  They are only about 10 km from where I live in San Antonio.

36. Flame-throated warbler (the throat/breast is more yellow-orange than red and does not look like the illustration in Garrigues & Dean)

One thought on “Turrialba Quetzals at Bajos del Volcán”