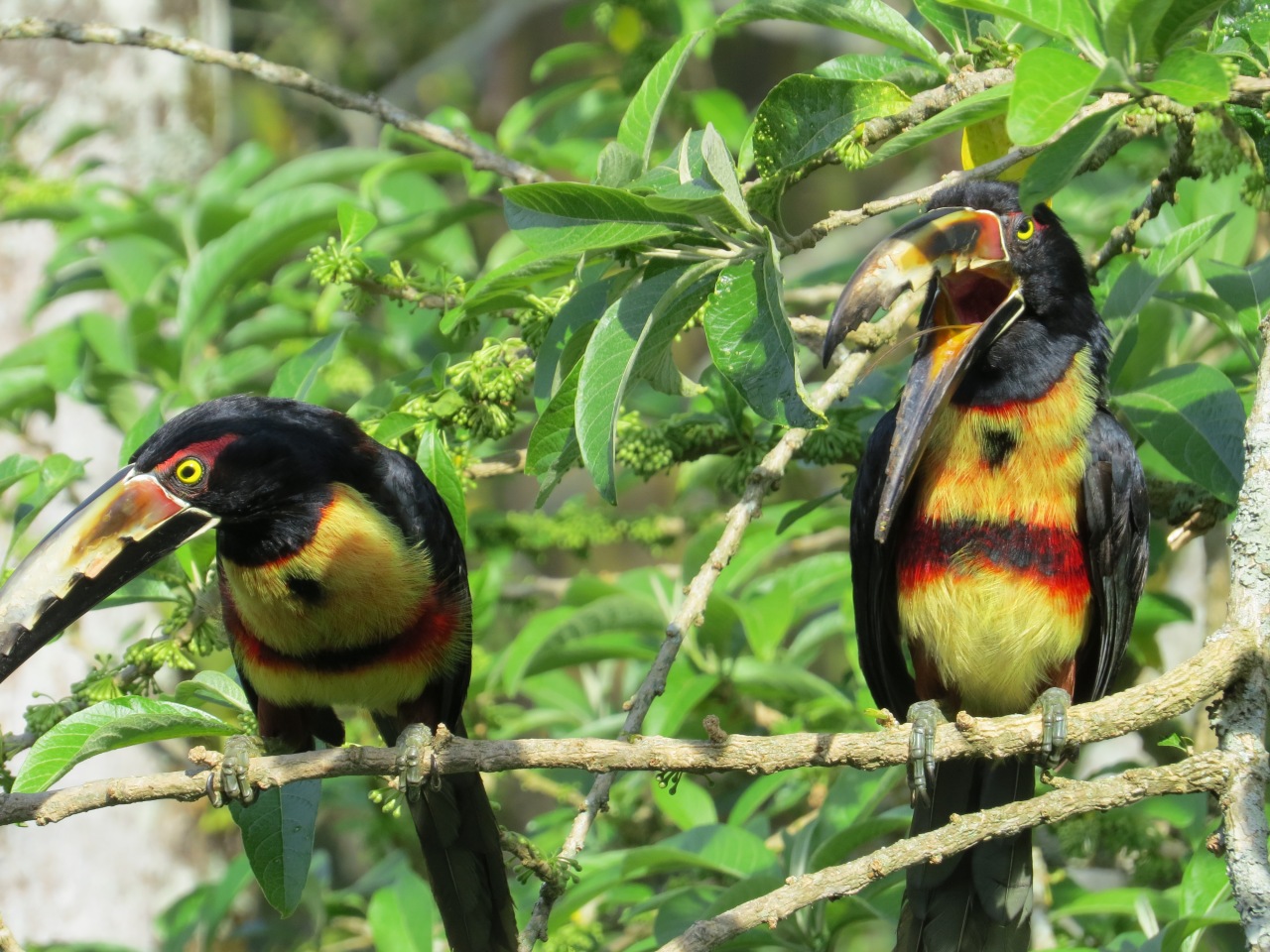 I spent a cloudy morning on the road between Guayabo (Arriba) and Guayabo (Abajo) and ran into some excellent birding, despite a final species list of only 37.  I awoke at the crack of dawn here in San Antonio, just after the Tropical screech-owl went to bed.  Twenty minutes was all that was needed to pack a bite to eat and dress for the occasion.  I forgot rain gear, of course, in my hurry to get out the door.  It’s a beautiful little drive on dirt roads up to Guayabo (Arriba) and then down towards the Monument through cow pastures and a few forest remnants.  You get an idea of the terrain when you see Eastern meadowlark  among your first birds of the day.  The downhill stretch has now also been graded and so the road is passable, both up and down, for my battered Ford Ranger (no four-wheel drive), and I can actually return the way I came instead of driving down into Turrialba.

As you approach the National Monument, the forest begins, mostly on the left-hand side, and the Río Guayabo can be heard rushing along to the right.  Birding the road turned out to be very fruitful, and I never even entered the Monument proper, which would have cost me $10.  I simply pulled off to the side.  A small flock of Collared araçari, feeding in an epiphyte-laden tree,  were the first birds here, but there was lots of activity, for both eyes and ears.  The highlight at this first stop was a flock of twelve Brown-hooded parrots.  When I first came to the area almost two years ago, I began by thinking that many of the parrot fly-bys at the house in San Antonio were this species.  However, after never getting a positive id, I concluded that they were all White-crowned parrots, chucuyos to the locals.  It seems I will now have to make a big effort to get some of those fly-bys because the Brown-hoodeds came up really close and gave me some twenty minutes of eye-to-eye contact.  Naturally I had left the camera at home.  The next little stop brought a female Violaceous trogon, another species I have not yet found at San Antonio.  This was a little frustrating to me because I had brought with me a list of some 32 species, not found yet by me, that a birding tour had reportedly identified at Guayabo, and among these were two trogon species, but not the Violaceous.  I actually ended the day without seeing (or being able to identify) a single one of those 32 species.  My last stop, just before the Monument entrance, brought a wave of warblers containing dozens of individuals.  I must have missed a good third of them.  The sheer numbers made it impossible for me to concentrate, and I had to spend a good hour on them before the activity died down somewhat.  There were no rarities, but among them I thought I found a White-vented euphonia, a species new to me, despite its supposed regular occurrence in many parts of Costa Rica.  Where do all these reputedly common birds hide?  Actually, I’m pretty sure that this was a Tropical parula viewed from below and quickly.  Cross off the still elusive White-vented euphonia.

Several wood pewees appeared but I’m damned if I know whether they’re Western or Tropical.  I suppose they could even be Eastern.  None of the bird-guide descriptions help because voice, bill-colour and amount of yellow never match up.  Ah well.   Oh yes, in the huge trees at the Monument picnic tables I was a little surprised to find a large flock of Chestnut-headed oropendolas, another species that never seems to make its way over not much more than 5 km (as the Oropendola flies) to my home in San Antonio.

I attach a list of this morning’s species, but my little excursion was made all the better by two additional discoveries:  firstly that the road downhill can also take you, via mostly dirt road and in about an hour and a half, to Siquirres (I will explore it later this week); secondly that in Guayabo Abajo there is a very nice little trout restaurant with cabins and ponds devoted to environmental education.  The owner, who has lived there for some 26 years, is a very well-informed gentleman by the name of José Miguel.  Our conversation, ranging from Costa Rican politics, to fish, to birds, was another highlight of the day for me.  What a recurring delight and surprise (still!) it is, in this most modest and unassuming of countries, to meet time and time again these happy and self-assured, yet unpresumptous, people.

If you visit Guayabo, see the birds by all means, but don’t miss spending some time with the locals, and especially at José Miguel’s trout place.

A big downpour drove me home, where I was greeted by a pair of White-lined tanagers at the bird feeder.