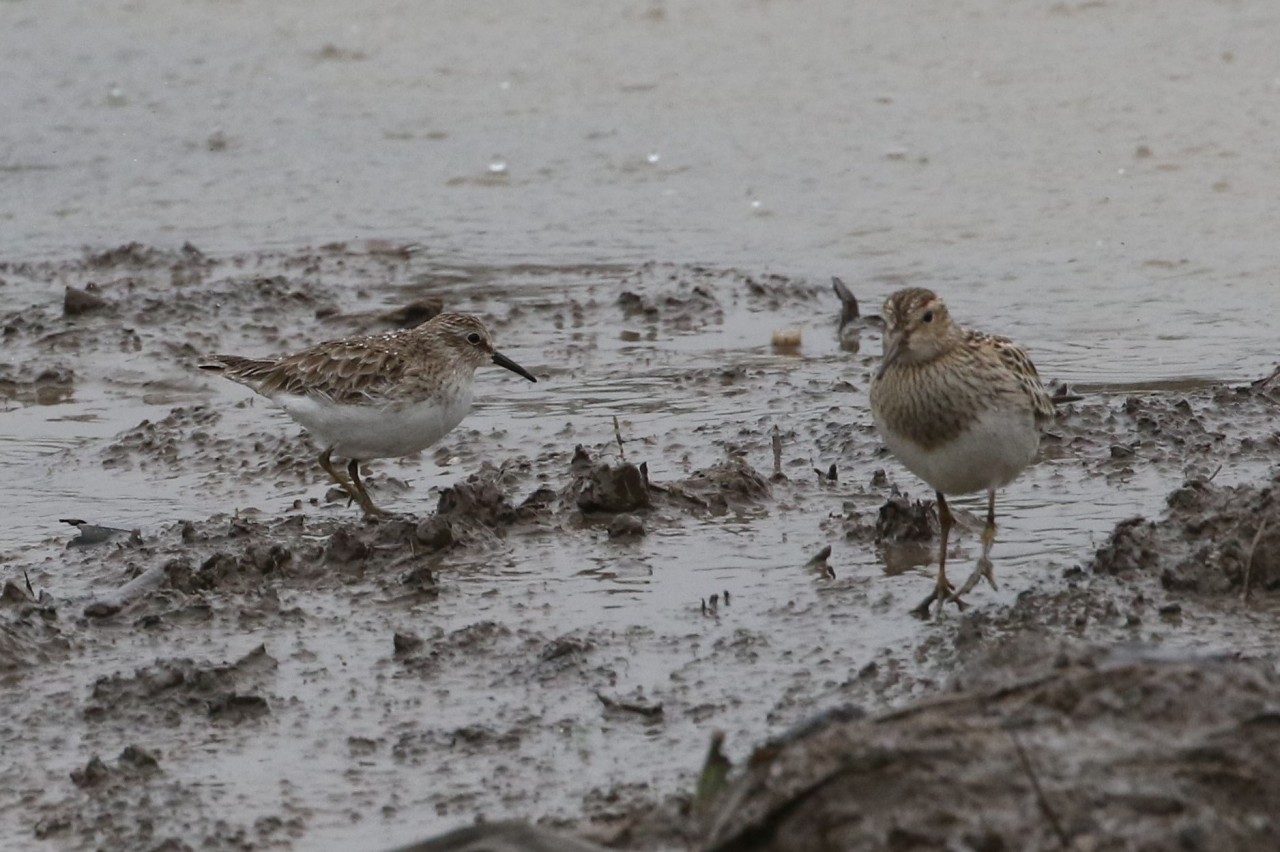 I have frequently reported on bird sightings from the Angostura Dam. Recently, however, habitat there has changed significantly to allow a wave of shorebird sightings. This makes several migrant species of wader more readily available to birders in the Turrialba area. These species will be of less interest to North American birders visiting Costa Rica, but they cause high excitement in the local bird-watching fraternity.

The Angostura Dam access paths near Florencia and San Buenaventura are in any case a marvelous place to see tropical birds, but for migrant sandpipers the best available location up until now for our local birders to see migrant shorebirds was an hour’s drive away at Coris, near Cartago.

The following photographs of three different ‘peep’ species were taken at the Angostura site, most of them quite recently:

The Pectoral Sandpiper (Calidris melanotis) is a long-distance migrant; this particular individual has probably flown from its Arctic breeding grounds. So far as is known it has not previously appeared at Angostura. My own sightings of this species in Costa Rica were at Coris, Cartago. It is definitely a rarity in this country.

As its name implies, the Least Sandpiper (Calidris minutilla) is the world’s smallest sandpiper. Its pale yellow legs are a good field mark, if they are not covered in mud! As the photograph below shows, it is obviously much smaller than the Pectoral Sandpiper:

The Semipalmated Sandpiper (Calidris pusilla) seen below is on its way to coastal South America after already flying from the tundra of either Canada or Alaska. The grey to brown plumage is not a safe distinguishing feature to separate it from the Least Sandpiper (or the Western Sandpiper). Neither is size, since its Latin specific name pusilla means ‘very small’. To distinguish from the Least Sandpiper, note the dark legs and the heavier bill.

The next two species may look similar in the field guides but you are not likely to get them confused. Although both have been seen in Turrialba before, the new muddy scrapes at Angostura provide much more suitable habitat.

The final species for today’s post, not a sandpiper, is the only snipe found in Costa Rica. Wilson’s Snipe (Gallinago delicata) loves both marsh and mud and Angostura is again the best place to find it close to Turrialba. Its long, straight bill is distinctive, as is too its zigzag flight when flushed from where it crouches, well camouflaged, on the ground.

Now is the time to pay a visit to Angostura, whatever the weather!

2 thoughts on “Shorebirds at Angostura”