Alone with my candle in a very rustic cabin turned into totally alone without even a view of any of my body parts, as soon as I blew out the candle.  La Marta is a great experience even if many of its highly-touted species decide to hide out during torrential rain.  The rain came down in buckets and brought down, with a big crashing sound, a huge tree close to the cabin during the night.  It’s hard to be too terrified when you can see absolutely nothing.  In the morning, not 15 yards from the cabin, I found the tree and the path it had cut through the surrounding vegetation.

The bird list attached is again a modest one, and it refers to March 18 and 19 of 2009, in my pre-blogging days, when I made the trip in the truck to La Marta via Pejibaye.  I knew of the place from a conversation with Kathy Erb at the Rancho Naturalista, near Tuis.  The Rancho is one of the best bird-tour experiences in Costa Rica, although beyond my budget at the present time.   I simply drove up there and was given a very friendly welcome, including a free breakfast, by Kathy, who is the owner.  The place was full of birders gaping in amazement at the dozens of birds, including the beautiful Snowcap, zipping around the feeders.  Life is wonderful.   I certainly hope to be able to stay there at some future time.

But I digress.  On the trip to La Marta, some of the aquatic species, including a surprise pair of Blue-winged teal, were seen on the Río Pejibaye on the way from Turrialba.  However,  I saw two beautiful tanager species at the Refugio that were life birds for me at the time (Bay-headed tanager and Tawny-crowned tanager).  Surprise, surprise, since then I have seen them only in my dreams despite their bird-guide status as, and I again quote, ‘common’.  I merely caution birders visiting here for a week or two that they are probably not going to see too many of the Costa Rican species listed in the literature as common.

It’s a nice little drive up a dirt road from Pejibaye to the Refugio La Marta.  It passes through a couple of villages full of the nice friendly folk you find everywhere in this country.  It also passes through some forest remnants and might in itself have some nice species without entering the refuge.  Since I had set off with my usual impatience and total lack of forethought, I had to return to the nearest village to get enough food to last me the couple of days I was expecting to stay.  As it turned out, all I got was the second half of this first day, having dallied en route, and the morning of the next one.  The heavy rain then made further birding sheer impossible.

The entrance fee was a strange affair.  You pay the guards at the entrance $12 if you want to go into the refuge, which is heavily forested along a mountain river and its tributaries.  However,  if you stay overnight in the cabin they charge you only $10, although this amount didn’t seem to be set in stone.  Perhaps I paid less because I told them I lived near Turrialba, but I don’t think so.  At all events, it was money well spent and I was the only human being in the whole refuge once I left the gate-house.  Fantastic.  The guards were extremely helpful and supplied me with several items, such as matches and candles, that I ought to have brought with me.  Fortunately, I had brought a sleeping bag, which is required.

The cabin is reached via a suspension bridge over a river just made for American Dippers and Sunbitterns (I got the latter but not the former), but the road approaching the bridge was the most productive for birding.  After the bridge it’s thick forest, which is a wonderful natural environment but thinly populated with birds.  You walk along muddy paths next to the river for at least 15 minutes before you get to the clearing with the cabin.  On the way you pass the remnants of what was, I think, a sugar-cane mill.  This area was very productive for birds and you can’t miss the Sunbitterns there. 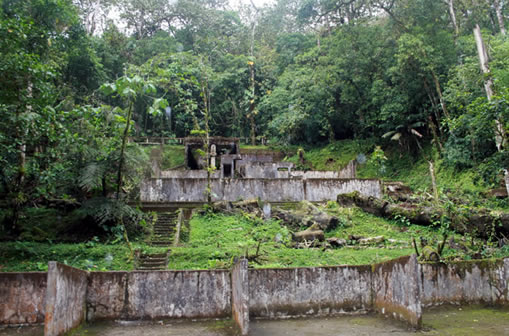 If I hadn’t seen a single species, I wouldn’t have missed La Marta for the world and  I really must return when the weather is a little more cooperative.  I’d also like to explore the possibility of reaching the Parque Nacional Tapantí from there on foot.